Darwin was the first to recognize it: Galapagos wildlife is one of the true wonders of our planet. Blue-footed boobies and giant tortoises, sea lions and magnificent frigatebirds: the islands in this archipelago are aswarm with astounding species, many found nowhere else on Earth. Walking in their midst, one catches a glimpse of a world before time began—a world where the black-sand beaches and volcanic rocks were still new, and where strange creatures, each more marvelous than the last, roamed without fear.

Today the Galapagos are home to 56 endemic species. Taken as a whole they display a stunning variety: penguins as well as flamingoes and hawks, iguanas as well as seals and tortoises. To give you a preview as to what’s in store for you as you tour this delicate ecosystem, here’s a list of 15 iconic Galapagos wildlife species, chosen by naturalists, scholars, and visitors as the most representative and fascinating creatures that inhabit this miraculously unspoiled natural reserve.

Brilliant pink smudges in a black-and-green landscape: such are American flamingoes, one of the many colorful species that inhabit the Galapagos. Their rosy hue stems from their diet: tiny pink brine shrimp full of keratin, which transmit their color to the stilt-legged birds. Be warned, though: these birds are as scarce as they are beautiful. If you’re keen to see them, the best time is during nesting season from May to July.

“Booby” comes from the Spanish bobo, “silly,” and these birds are nothing if not klutzy as they waddle around on the jagged rocks. In the air, however, it’s a different story. There they’re spirited, agile flyers, capable of plunge-diving like bombers in search of fish. Why the blue feet? Turns out it’s a sexual siren-call from the males to the females: a nutrient-rich diet equals lots of blue pigment, and lots of blue pigment equals a healthy, sexy male. How did this fuzzy-headed bird forget how to fly? No one knows, though zoologists speculate it could have something to do with the Galapagos’ lack of predators and abundance of shoreside food sources. Whatever the case, the flightless cormorant feeds by diving down to the sea floor to spear squid and octopus with its beak. You’ll most likely see it hopping clumsily from rock to rock along the coast.

In the Galapagos, this avian species comes in two varieties: great or magnificent. Not exactly modest, granted, but the bombast is understandable once you see the spectacular red pouch the males puff up to attract the females. This greatness/magnificence also manifests itself in their soaring flight patterns, which include dive-bombing to skim fish or squid off the water’s surface. For the record, however, be it said their habit of bullying other birds to steal their regurgitated, half-digested food is not especially—ahem–becoming.

Unlike most seals, this Galapagos-only species spends most of its time on land, where it hides out in caves or under lava ledges. This can make it hard to spot, but for those who manage to get close, its docile, almost-human facial expression and manners are invariably charming. With some 10,000 adults on the islands, the fur seal’s population today is endangered, but stable. 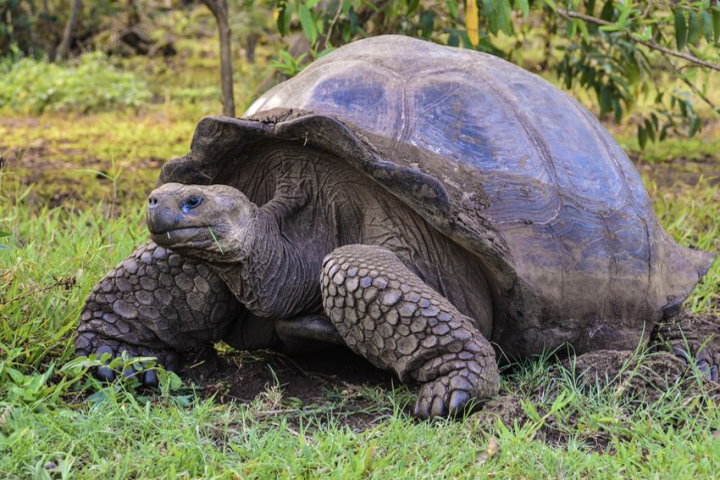 The giant tortoise is the essence of iconic, since many visitors to the Galapagos come expressly to see it. But it’s also one of the longest-lived vertebrates on the planet, reaching ages of over 170 years in captivity. In the past, it was hunted to near-extinction by pirates and hungry sailors, but today it’s experienced a comeback: its population of some 19,000 individuals is found scattered across seven islands.

This apex predator is as stunning as it is rare. With a population of just 300 adults on the islands, it’s on the Galapagos’ list of critically endangered species. But if history is at all indicative, the Galapagos hawk may yet survive. Not only is it an expert hunter, feeding on locusts, snakes, lizards, rodents, iguanas, and baby turtles, but it has also evolved different traits on the various islands where it lives. If you’re a fan of birds of prey, this one’s as choice as they come.

This pint-sized penguin is an easy target for predators on both sea and land. It’s also seriously threatened, with only some 1,500 in existence. Yet despite its fragility, it’s also one of the Galapagos’ most popular species, if only for its cuddlesome appearance and charming demeanor. It’s also deceptively resilient since, as the only penguin to live in the northern hemisphere, it’s become adept at finding cold-water currents to keep itself cool. A true Galapagos icon. Don’t be surprised if these playful mammals come flopping up to say hello while you’re sitting on the beach: sea lions are famously friendly. So much so, in fact, that the females and pups are often seen frolicking in the water along snorkelers, whom they find endlessly intriguing. Use caution with the bulls, however: at 500 to 900 pounds, these territorial males can do a lot more damage than the large dogs they sometimes resemble.

Charles Darwin was no fan of these lizards, scorning them for their “singularly stupid appearance.” For today’s visitors, however, the species has become one of the Galapagos’ most popular, as they scamper around and sun themselves on the black basaltic rocks. Colors range from brownish-red to yellow to the mega-rare pink iguana, of which only 200 exist today.

This impish, spiny reptile is like the Galapagos’ own mini-dinosaur. Diverging from the evolutionary line of the land iguana between five and eight million years ago, it feeds primarily on algae along the shoreline. Its coloring also varies, from black in the infants to iridescent red, green, black, and gray in the adults. Darwin had no love for these “disgusting clumsy animals” either, but if you grew up playing with toy stegosauruses, you may find yourself wanting to take one home. 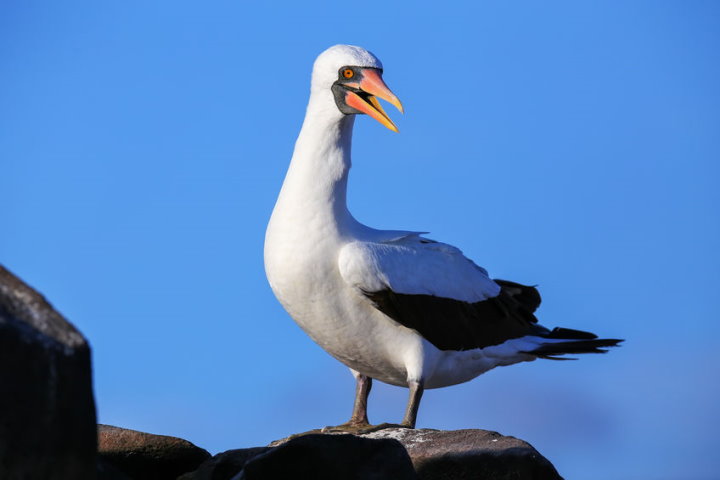 This bird’s title is a misnomer. Originally thought to be a subspecies of Peruvian booby whose habitat was near the famous Nazca lines, it’s today recognized as a species in its own right. It’s also visibly the most elegant of the Galapagos boobies, with brilliant white plumage, a pinkish-orange bill, and a striking black mask. As with its cousins, however, its mating dance is a comic spectacle of the highest order.

Red feet, blue bill, brown plumage, white belly: this avian species could use some tips on color-coordination. Clownish appearance apart, however, once it manages to get aloft it’s an impressive diver, with the ability to pluck fish out of the water at lightning speed. And it’s seriously skilled at constructing nests in treetop branches. If only it could get a little more graceful at those take-offs and landings, however…

This sandy-gray lizard is found in exactly one spot on the entire planet: Santa Fe Island. There, be it said, it enjoys a pretty cushy life: munching on prickly-pear cacti, lazing amidst portulaca flowers, basking in the sun. It also has a symbiotic relationship with the local finches, who do the iguanas the courtesy of eating the parasites that hide in the folds of their skin. With its aerodynamic curves and eight-foot wingspan, this bird is a superb glider. It needs to be, to undertake the 60-mile flights it makes in search of food for its young. It also engages—to onlookers’ delight—in a rather odd courtship dance, complete with head nodding, bill clacking, stumpy waddling, and strange mooing sounds. Like other Galapagos wildlife, the waved albatross is in need of protection: due to human encroachments and long-line fishing, today this species is critically endangered.