San Cristóbal, the farthest east and second most populated of all the Galapagos Islands, is also the site of one of the two main airports serving the Ecuadorian mainland, some 600 miles away.  But it would be a shame to simply fly in and head straight for other islands, because San Cristóbal offers some of the best wildlife viewing in the Galapagos, as well as some historical footnotes.

This is the island where Charles Darwin first set foot on the Galapagos during his famous voyage on the Beagle in 1835, which eventually led to his publication of The Origin of Species.  San Cristóbal is also the site of the first permanent settlement in the islands, dating from 1869.

But history has to take a backseat to San Cristóbal’s land and sea life and, especially, its bird life.  This is birder heaven.

All three species of boobies – Blue-footed, Red-footed, and Nazca, some of the most endearing birds on the islands – are represented here.  The island also features two species of frigate birds – known as the “pirates of the sea” because they steal other birds’ food in mid-flight – as well as finches, mockingbirds, Yellow Warblers, Storm Petrels, Swallow-tailed Gulls, pelicans and more.

For marine life, you can seek out colonies of sea lions, and snorkel or dive with sea turtles, rays, octopi, sharks, and a colorful array of tropical fish.  For viewing land creatures, you have your choice of two giant tortoise reserves.

Your island tour may take you first to the Galapagos National Park Visitor Center a short distance from the largest town and the Galapagos’ provincial capital, Puerto Baquerizo Moreno.  At the visitor center you can get a good overview of the Galapagos’ history and its remarkable displays of fauna and flora – much of it endemic to the islands and much of it completely unafraid of humans. Where to View Bird Life

San Cristóbal has a number of excellent birding areas.  One don’t-miss spot is Punta Pitt (Pitt Point), the only place in the Galapagos where you might see all three species of boobies breeding together.  It’s easy to tell the Blue-footed from the Red-footed variety – just glance down at their feet.  (As a bonus, they may be doing the “booby dance,” a colorful mating ritual.)

The Nazca boobies, endemic to the islands, are the largest of the three species.  You may see the mothers nesting on two eggs, which they lay about six days apart.  When they have hatched, the older brother rejects the smaller one.  Only one baby survives, usually the older, stronger one.  While this sounds cruel, it’s a matter of family survival: Nazca parents aren’t capable of raising two children, and if both offspring lived, the parents would likely die.

Another key birding spot is Frigate Bird Hill, where both Magnificent frigate birds and Great frigate birds are found – one of the rare places the two species mix.  Watch for the mating signal of the male frigate birds – a huge inflated red breast that attracts the females.

When not engaging in courtship, the sleek black frigate birds can usually be seen in the air, swooping down to chase passing birds to swipe the food from their beaks.  Because frigate birds lack a certain gland that most sea birds have, they can’t get wet in saltwater, forcing them to find their food in the air rather than the sea.  They’re well-suited to this role: they can fly as long as two weeks without touching land.

Because San Cristóbal harbors the only major freshwater lake in the Galapagos, however, you might spot frigate birds bathing in El Junco Lagoon, located in the island’s highlands.

Most small Galapagos cruise vessels can sail through a narrow passageway dividing the split sides of Kicker Rock – also called Leon Dormido, the “sleeping lion” – a dramatic volcanic formation that rises hundreds of feet into the air.  As you pass through, you might spot Blue-footed and Nazca boobies and frigate birds as well. Where to View Sea and Land Animals

While birds may be the stars of the show on San Cristóbal, you can also see plenty of land and sea animals.

There’s a sea lion rookery (La Loberia) along a rocky, coral sand beach near the airport, where you can watch baby sea lions splashing about in tide pools – taking their first swimming lessons under the watchful eyes of their mothers.  Many of the young sea lions are playful and approach humans, especially snorkelers, but their fathers may corral them in the water.  Meanwhile, many adult sea lions simply snooze on the rocks or bark incessantly.

Punta Pitt is another prime spot to encounter sea lions, as is Kicker Rock.  Isla Lobos, a small island off San Cristóbal that can be reached by an hour’s boat ride, has both sea lions (lobos) and fur seals; the latter do not bark.

Finally, you may want to visit one or both of the giant tortoise reserves on San Cristobal.  One, which requires a three-mile one-way hike, features the tortoises in their natural habitat, while the other (Cerro Colorado) has a breeding program and semi-natural environment.

If you have time to spend on San Cristóbal, you can get a mini-introduction to many of the Galapagos’ most fascinating creatures – all within reasonable distance of the international airport. 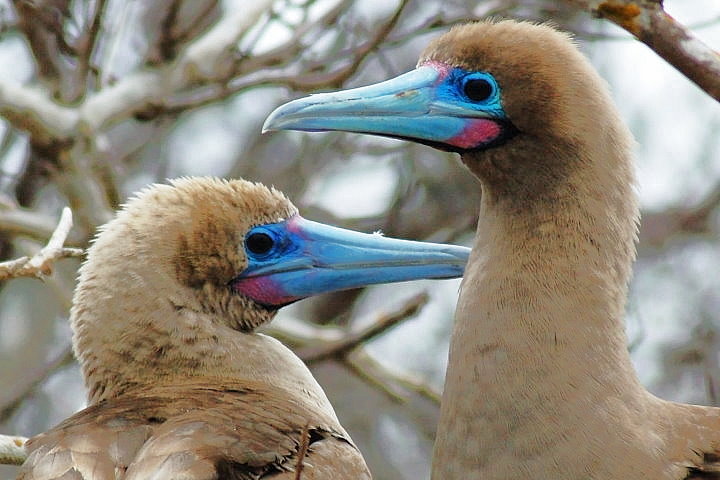