When most people think about the native wildlife of the Galapagos Islands, they probably think of iguanas, blue-footed boobies, sea lions and tortoises. Not quite so famous, at least outside of scientific and bird watching circles, are Darwin’s finches.

This group of at least 13 species of finches is endemic to the islands, having evolved from one single ancestor. And not only were they fundamental to Darwin’s theory of evolution, they are also fascinating creatures with an array of quirky characteristics that can differ from one island’s population to the next.

Charles Darwin arrived at the Galapagos Islands in September 1835. For weeks, he observed and collected various specimens, including a variety of small birds. At the time, he didn’t appreciate the significance of these birds. But on his return to London he presented them to John Gould, a famous English ornithologist, who identified them as an entirely new group, containing a number of related but separate species. Darwin studied the birds further, and they would ultimately help shape his theory of evolution. In the second edition of his classic book The Voyage of the Beagle, he wrote: “Seeing this gradation and diversity of structure in one small, intimately related group of birds, one might really fancy that from an original paucity of birds in this archipelago, one species had been taken and modified for different ends.” The wide variety of beaks displayed by the Galapagos finches provided an important breakthrough in the development of Darwin’s theory. The birds had developed in isolation from the South American mainland, with each island becoming its own little world. Darwin observed that the birds had beaks of all shapes and sizes, some slender and some wide, some blunt and some pointed. This was a vital clue as to how species might change over time to adapt to new environments. In this case, each beak had developed as a specific way to get a certain type of food available on its particular island. Much more recently, in 2015, scientists discovered that the beaks of Darwin’s finches are shaped by the same gene that helps form human faces. Darwin didn’t know it at the time, but his finches were among the world’s fastest-evolving vertebrates. Due to the closed and rapidly changing environment on the Galapagos Islands, the birds were forced to adapt quickly, changing both their appearance and behavior to suit the changing environment. In 2017, a study of Darwin’s finches revealed that new species could develop in as little as two generations. 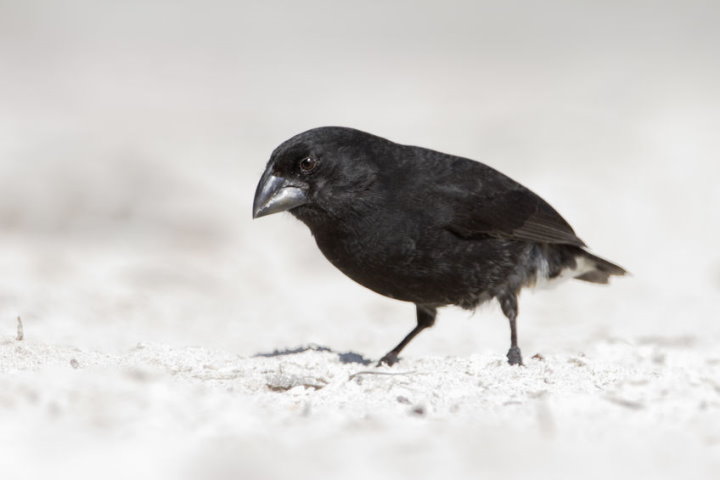 Bird species sing different songs; this is one of the reasons they rarely breed with each other. And on the Galapagos, a young male finch learns his mating song from his father, and typically produces the same song for the rest of his life. But a study that took place on Daphne Major Island from 1978 to 2010 discovered that the songs of at least some of Darwin’s finches could diverge when a new species of finch entered their community. The study found that medium ground finches and cactus ground finches began to sing faster songs than their fathers, due to the arrival of a new species of Galapagos finch. As mentioned above, the various species of Darwin’s finches differ most notably in the shape and size of their beaks. This adaptation was brought about by the different food resources on each island. For example, the small tree finch has a distinctive short, curved beak that it uses to feed primarily on insects, while the large ground finch has a large, short beak for cracking big seeds and nuts. Other finches have long beaks to punch through cactus fruit to eat the pulp inside, and some have shorter beaks which can rip through the base of the cactus to reach the pulp and any insect larvae found within. Most peculiar of all is the vampire ground finch, which will occasionally feed by drinking the blood of other birds. When food is scarce, the vampire finch will use its sharp beak to peck at the skin of larger birds, mainly the Nazca and blue-footed boobies, until it draws blood. The woodpecker finch deserves a special mention for its ability to use tools to dislodge prey, such as grubs, from nooks and crevices in trees. They normally use a twig, stick, or cactus spine as a tool. They are even capable of modifying their tools for maximum efficiency, and have been observed shortening sticks and cactus spines to best serve the task at hand. During the dry season, when food sources are less abundant, woodpecker finches will use tools to forage for as much as half of their food, often using the same tool on multiple trees.