If you’re going to fall in love with one animal during your time on the Galapagos Islands, there’s a good chance it will be the Galapagos sea lion. These playful, inquisitive and highly sociable creatures are found throughout the archipelago, lounging around on beaches (and sometimes on public benches) and swimming gracefully in the sea.

Until fairly recently, Galapagos sea lions were considered the same species as the Californian sea lion, until it was confirmed that they had in fact separated from their California ancestors some two million years ago. They are now considered a distinct species, Zalophus wollebaeki, which breeds in only two places: the Galapagos Islands and, in far smaller numbers, on Isla de la Plata just off the coast of Ecuador.

It’s easy to distinguish between adult male and female Galapagos sea lions simply because of their size. Adult males weigh about 550 pounds on average, but some grow to a mighty 900 pounds. Females, meanwhile, are much smaller, weighing on average around 200 pounds, with the largest reaching 250 pounds.

When they’re not lazing around on the beaches, Galapagos sea lions take to the water to hunt. And while they’re far from elegant on land, they are wonderfully agile in the ocean, their smooth and streamlined bodies cutting through the water with ease. Sardines are their main prey, and they’ll sometimes swim eight or nine miles from the coast over the course of a few days to hunt them down. This, however, is a risky business. This far out, the Galapagos sea lion is at risk from its main predators: sharks and whales.

Galapagos sea lions are known for their playfulness, but territorial bulls will sometimes display aggressive behavior, and have been known to chase away humans on both land and in the water. Females and pups, however, are some of the most playful and amiable creatures you’ll ever come across, and happily swim with snorkelers. And as they’re the most abundant marine mammal in the archipelago, you’ll have plenty of opportunities to interact with these fun and fascinating creatures. 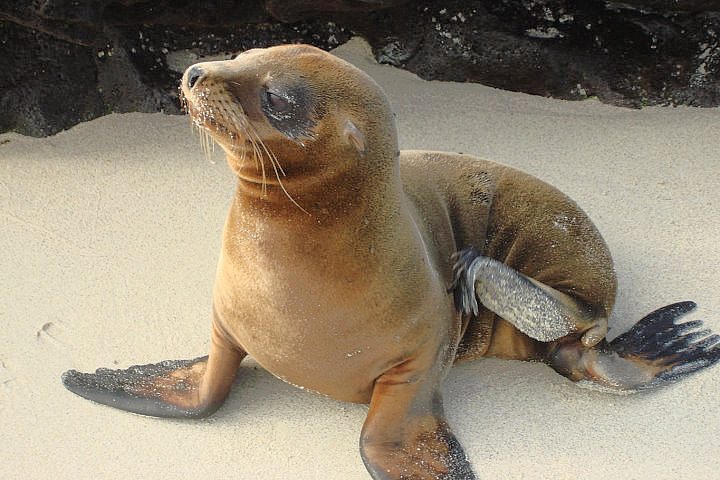