Of the six different species of boobies in the world, none have had such an identity crisis as the Nazca booby.

During his trip to the Galapagos Islands in 1897, the British banker, politician and zoologist Walter Rothschild identified the bird as the Peruvian booby (Sula variegata), which lives along the Peruvian coast. He later reclassified it as a new species, Sula granti, before deciding that it was in fact a subspecies of the masked booby, to which it bears many similarities.

It was only fairly recently, after mitochondrial DNA analyses, that the Nazca Booby was once again considered a species of its own — and not conspecific with the masked booby — and reverted back to its previous scientific name, Sula granti.

Of course, the Nazca booby was entirely uninterested in humanity’s obsession with classifying things. It was happy to hang out on the Galapagos Islands and Isla de la Plata in Ecuador, its two main habitats, hunting pilchards and breeding.

Like other species of booby, the Nazca booby engages in highly ritualized mating dances during which the male kicks things off by skypointing, stretching his beak up towards the sky to show off his neck. But unlike most species, the Nazca booby is an annual breeder. On the Galapagos, breeding times differ from one island to the next. On Genovesa, for example, they breed between August and November, while on Española the breeding season runs from November to February.

In terms of appearance, the Nazca booby is arguably the most elegant of all the Galapagos boobies. It is notable for its brilliant white plumage, pinkish-orange bill, and black flight feathers and mask. It also has very sensible grey feet, so avoids the clown-like comparisons often directed at its fellow islanders, the blue- and red-footed boobies.

Read more about the Nazca Booby at Galapagos Conservation Trust.

Galapagos Cruises Where You are Likely to See the Nazca Booby 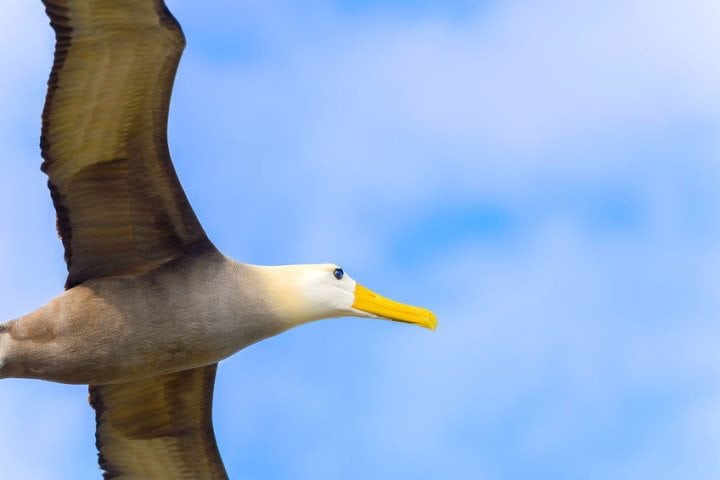