Top Galapagos Activities by Land or by Sea

So: you’ve deplaned at Baltra Island’s airport, been carted down to the docks on your shuttle, and just stepped off the barge onto Santa Cruz Island, the Galapagos’ main tourist hub. Congratulations—but don’t flop back in your hammock just yet. With 18 main islands, 107 islets, and 116 authorized visitor sites to choose from, planning your next few days’ itinerary in the Galapagos could take some doing—and that’s without considering the 9,000-plus wildlife species that throng this one-of-a-kind natural refuge.

Galapagos attractions can be head-spinningly diverse. Active volcano or idyllic white-sand beach? Abandoned pirate cave or giant-tortoise ranch? Here, you can go spelunking in a prehistoric lava tunnel in the morning, browse a fish market crowded with sea lions at noon, and snorkel with hammerhead sharks in the early evening. Add to that the dilemma of deciding between cruise-ship tours and land-based tours, and it’s not hard to see why picking the top Galapagos activities can be so daunting.

To help, here’s a list of top Galapagos activities. Some are ship-based, others targeted at land-lubbers. Use it for inspiration as you uncover the wonders of this nowhere-else-in-the-world ecosphere. 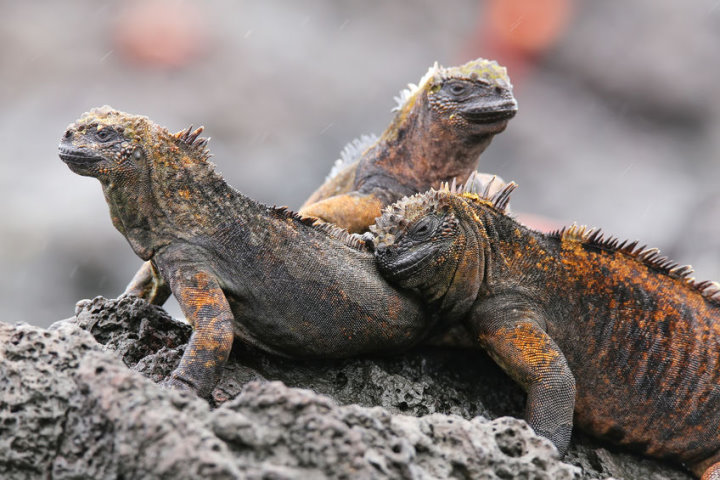 Blue-footed boobies, giant tortoises, marine iguanas: everyone knows the Galapagos’ iconic species. What not everyone knows, however, is just how exotic the archipelago’s other, less touted denizens can be.

Take the waved albatross. With its eight-foot wingspan and glands enabling it to drink salt water, this is a bird that can soar over the ocean for months without ever coming to land. Flight distances for this king of the air run into the hundreds of miles, yet it only breeds on tiny Española Island.

Then there’s the pink iguana, a spiny, salmon-colored imp who lives on the remote north face of Isabela Island’s Wolf Volcano. It’s one of the planet’s oldest reptiles, having diverged from other species 5.7 million years ago, yet today only some 200 individuals survive.

Equally weird critters inhabit every crevice of the Galapagos. Flightless cormorants on Fernandina Island, whale sharks off the coast of Darwin: this is a place to experience nature in all its adaptive genius. Prepare to be left speechless. Walkway on Bartolome Island with Pinnacle Rock in the background

With hundreds of miles of trails crisscrossing its basaltic rocks, the Galapagos is a veritable Fantasy Island for hikers. Here trekkers of all skill levels will find jaunts to suit their tastes. Among the highlights: the 5.5-mile excursion to Sierra Negra, a 4,500-foot volcano that looms over Isabela Island—and whose fiery lava fountains lit up the night sky back in 2018. Wending your way along its 36-mile circumference, you can peer into its glowing fumaroles and gaping caldera. Feeling fit? Another outing takes you up 374 steps to view Pinnacle Rock, a sharp stone arrowhead that rises from a placid inlet on Bartolomé Island.

Not all Galapagos treks scale the heights. On Santiago Island, a walk along Sullivan Bay leads through a blackened lava field, affording a glimpse of how Earth’s crust must have looked at the dawn of time. There’s also the Isabela Island Wetlands Complex, where branching trails thrust deep into mangrove swamps, and herons and flamingos peep from the brush. Think the Galapagos’ terrestrial species are a marvel? Wait till you get a load of the creatures beneath its waves. Parrot fish, spotted eagle rays, Galapagos penguins, green sea turtles: here a whole vast aquarium glides past the bedazzled diver—often at distances close enough to touch.

Snorkeling is the easiest way to see these fantastic faunae. Hotels and cruise ships offer equipment and lessons, and prime spots for strapping on fins can be found in seemingly every cove and estuary. They include Las Grietas, a narrow channel near Puerto Ayora on Santa Cruz where the crystalline pools are a mix of fresh and salt water, and Kicker Rock, a 460-foot stone blade that slices through the waves near Puerto Baquerizo Moreno on San Cristóbal Island.

Nor will scuba fans be disappointed. At Wolf Island’s Shark Point, divers can swim with hammerheads and tiger sharks drawn by the cold Humboldt current. There’s also nearby Darwin Island, with its swarms of fish and clustering coral. Nota bene: these destinations are for skilled, certified divers only. Bring your underwater camera. Full disclosure: Punta Cana or the Seychelles, the Galapagos aren’t. Formed by eruptions of black basaltic lava from a hotspot in the Nazca tectonic plate, the beaches here are typically stony, and so lack the turquoise waters and palm trees deified by sun-worshipers. That said, their craggy shores conceal a few gems.

Tortuga Bay, on an isolated stretch of Santa Cruz’s southern coast, heads up the list. Here white sands frame translucent waters that are alive with marine species, including iguanas, reef sharks, and rays. At night, the sea turtles for which the beach is named can be spotted laying eggs amid the dunes.

No less resplendent is Gardner Bay, on Española. Here a pristine shoreline is frequently commandeered by dozing sea lions, who enjoy basking on the warm sands. In 2017, CNN chose this as one of its Top 20 Beaches in the World. Ready to get rad? The Galapagos are home to numerous trails waiting to be torn up by a rented BMX. If you’re among those adrenaline addicts for whom walking is just too stodgy, the shops in Puerto Ayora and Puerto Baquerizo Moreno have some seriously dope bikes to take you whizzing down the local paths.

Among the top biking routes in the Galapagos is Isabel Island’s Muro de las Lágrimas (Wall of Tears), a stone barrier built by prisoners in the local penal colony in the 40s and 50s. Its hilly trail winds past stunning coastal scenery. Also popular: the bike tracks on Santa Cruz, which amble through small farms in the highlands outside Puerto Ayora. If you’re looking to hit the perfect flow, this is it. Pangas are dinghies—inflatable, motorized boats used to transport tourists from cruise ships to the islands. More crucially, they’re also one of the best ways to tour the Galapagos’ coastline, as they can dip into coves and inlets inaccessible to larger vessels. In a panga, you’re guaranteed a front-row seat as the pilot gets you within touching distance of the basking iguanas and lava lizards that slip by at the water’s edge.

Top places to hit up in a panga include Bolívar Channel, where if you catch the season right you can spot orcas, dolphins, and even the occasional humpback whale, as well as Black Turtle Cove on the north side of Santa Cruz, where sea turtles and rays inhabit one of the islands’ biggest mangrove estuaries. Ask your operator: some will even let you go snorkeling by hanging a ladder over the panga’s side. Spoiler alert: This ain’t bird watching the way your dad does it. In the Galapagos, the avian species can be extreme—not to say flat-out bizarre.

Case in point: the vampire finch, a bloodthirsty little monster that pecks at the tailfeathers of the local boobies, then sucks their blood. Traveling in huge swarms, these birds are smart enough to crack open other birds’ eggs by rolling them off a cliff before sipping up the yolk.

Then there’s the magnificent frigatebird, whose mating ritual consists in puffing up its clownishly huge neck pouch and doing a shuffling dance for its intended squeeze. These birds have no problem with sloppy seconds: they feed by harassing other birds until they vomit, and then wolf down the pre-digested chow in midair.

With characters like these, bird-watching in Darwin’s playground is never dull. Fifty-six native bird species, 56 varieties of weird behavior. Be sure to sit dad down for a briefing before bringing him along. Like rum and treasure? You’re in luck—the Galapagos are pirate central. Owing to its strategic location near East-West trade routes, as well as its remoteness from the South American mainland, in the 16th and 17th centuries the archipelago was a refuge for sea rovers like Richard Hawkins and Captain Cook, who hid their ships in coves along the shoreline—and their booty in the nearby grottos.

Modern-day fans can visit these freebooter digs. Tagus Cove, near Darwin Lake on Isabela Island, is a known pirate hideout, with centuries-old graffiti from buccaneers and whalers on the adjoining cliffs. Also popular are the caves on Floreana Island, where sea marauders would replenish their supplies and (reportedly) inter their stolen goods. Who knows? With luck, you might dig up an old doubloon. 9. Pampering Yourself at a Luxury Spa

It’s OK to admit it: after a day of sandy, sweaty nature viewing, sometimes you just crave a bit of spoiling. In such cases, the Galapagos’ luxury spas are just what the wellness therapist ordered.

Services offered by Galapagos spas run the gamut. At Golden Bay Hotel & Spa, on San Cristóbal, you can decompress with a volcanic-rock hydromassage, then chill while sipping a drink in the rooftop Jacuzzi. Or if your detox needs run towards yoga and aromatherapy, Finch Bay Galapagos Hotel, on Santa Cruz, offers a full array of treatments—all in the setting of one of National Geographic’s Unique Lodges of the World. Facials, tonics, lava scrubs: it’s all here. Being well never felt so posh. Diving amongst hammerheads and manta rays give you the willies? No worries: glass-bottomed boats allow you to experience the Galapagos’ marine life without mixing it up with the creepie-crawlies. No need for snorkeling or scuba lessons: just strap on your life vest and watch the sea creatures slide by below.

At 15 feet in length and seating 12, glass-bottomed vessels can be found on both land- and ship-based tours. Typically, operators will start by showing you boobies and fur seals along shore, but it’s when the floor hatch slides open that the real show begins. Angel fish, garden eels, Galapagos sharks, golden rays: anything can float into view. Keep your eyes peeled for the sunfish, or mola: at 2,000 pounds, it’s one of the Galapagos’ rarest species. If you’re jonesing for a workout after eight hours cooped up on a cruise, sea kayaking offers the perfect solution. Paddling along in these lightweight craft, you’ll feel the calories burn off as you scout the Galapagos’ coastline.

Sea kayaks are available for use on nearly all high-end cruise lines and are an ideal way to probe the islands’ mangrove swamps and inlets. Their Day-Glo colors can be seen dotting places like Punta Espinosa on Fernandina, with its rock formations and crowds of marine iguanas carpeting the beach, and Puerto Villamil on Isabela, where Galapagos penguins feed off the local mangroves. Best of all, the Galapagos’ relatively calm waters mean even newbies can feel comfortable piloting these craft after a lesson or two. At five feet in length and weighing up to 900 pounds, the Galapagos giant tortoise is the archipelago’s biggest attraction—in every sense. Here, island-goers looking to do advanced studies in Turtle-ology will find plenty of places to get schooled.

Two of the best are right on Santa Cruz. El Chato Tortoise Reserve lets you study the plodding behemoths in their natural habitat, then visit a lava tunnel afterwards. By contrast, Rancho Primicias, situated right next door, is more peaceful and affords more photo ops. In both, rangers diligently protect the animals from human and animal predators.

Giant tortoises aren’t the only testudinal show in town in the Galapagos. At Tortuga Bay on Santa Cruz, you can see black sea turtles lay their eggs on the beach during January and February. Three months later, the hatchlings emerge and inch their way to the sea. There’s also the Charles Darwin Research Station just a mile or two away, an active turtle breeding center with fascinating displays explaining the archipelago’s ecology and history. 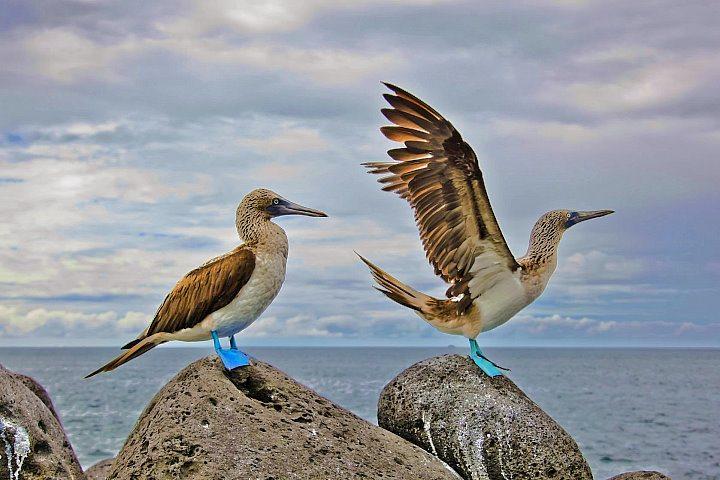