Marine iguanas that skitter up to you on seaside rocks, eyes darting. Frigatebirds, their crimson pouches inflating as they roost in bushes. Whitetip reef sharks, gliding past you as you snorkel in calm waters. Sound inspiring? It was to Charles Darwin, whose awe at the boldness of the Galapagos Islands’ wildlife was what set him on the path to his theory of natural selection. His 1831 voyage put this remote archipelago on the map, and ever since, the Galapagos’ fascination has continued to grow. Today, the natural marvels on this protected refuge are so abundant that choosing which of the main Galapagos islands to visit can be a challenge—even for the most serious eco-travelers.

You can hardly blame them. With 13 major islands, six smaller ones, and scores of islets, the Galapagos is an ecosystem unto itself. Factor in the 116 authorized visitor sites, scattered across a land mass of over 3,000 square miles, and you have a vast setting in which to see the region’s 56 endemic species—27 of them unique to the Galapagos. Walking through the volcanic landscapes, the mangrove swamps and black-sand beaches, you’ll discover a haven for vulnerable and endangered species, many of which depend on these islands’ breeding grounds for survival.

Here is our guide to the main Galapagos islands and visitor sites.

As the Galapagos’ main tourist hub, Santa Cruz is where you’ll find all of civilization’s trappings: banks, hotels, restaurants. But don’t think this island lacks for natural attractions. Tortoise-conservation farms, tubes made from dried lava, and lush mangrove swamps are just the beginning. Also in the do-not-miss category: Las Bachas beach, with its nesting grounds for sea turtles, and the Venecia islets, prime territory for shark watching.

This million-year-old rock is where Charles Darwin first came ashore in the Galapagos back in 1835. It’s also the site of a stunning Interpretation Center, where you’ll learn all about the islands’ natural and cultural history. When you’re done studying, head out to Punta Pitt, one of the best bird- (and specifically boobie-) spotting destinations in the whole archipelago. Or hike steep Cerro Brujo to meet some friendly sea lions. Formed by the fusion of six shield volcanoes, Isabela is the largest of the Galapagos’ islands. It’s also one of the most exciting, with everything from volcanic lookouts to abandoned World War II military bases on offer. Dinghy trips to scenic Elizabeth Bay let you explore red and black mangroves up close, while Vicente Roca Point is an ideal spot for whale and dolphin spotting. Laid-back Puerto Villamil offers the comforts of civilization—plus the convenience of white-sand beaches and tropical wetlands right nearby.

Looking for striking landscapes? Fernandina’s active volcano and four-mile-wide calderas fit the bill. This is the Galapagos at their most pristine, allowing the flightless cormorants and Galapagos penguins that nest here to live undisturbed. Don’t miss the lava cacti, an endemic (and bizarre) species that grows on barren lava flows. Birds, birds, birds: Genovesa is a paradise for avian aficionados. This means lava gulls, yellow-crowned herons, swallow-tailed gulls, and frigatebirds, together with the biggest colony of red-footed boobies in the world—some 200,000 in all. Or, if you prefer water to air, Great Darwin Bay is teeming with manta rays and hammerhead sharks. A true wonderland for naturalists.

Long exploited by buccaneers and whalers, Santiago today is blessedly uninhabited. Consequently, it’s a perfect spot for snorkeling, hiking, and exploring, from its black lava flows to its abandoned salt mines. For marine lovers, the fur-seal grottoes are a must. For bird watchers, the seasonal salt-water lagoons are aflutter with flamingoes and Galapagos hawks. The main show at Española is the waved albatross colony—and what a show it is. Each year, some 25,000 of the huge-wingspan birds make their way here to breed, launching themselves from the clifftops into a graceful glide. There’s also a spectacular wildlife trail littered with sea lions and lava lizards, and a blowhole that spouts water over 100 feet at high tide.

Got an urgent message for back home? Drop it off at Post Office Bay, Floreana’s birdhouse-shaped mail system that dates back to the 18th century. Sailors back in the day would leave letters for inbound ships, praying they’d reach their destination. Coral reefs, pirate caves, and a strange circle of jagged rocks known as the Devil’s Crown complete the panorama. The Galapagos owe their existence to volcanoes; in Bartolomé that debt is abundantly on display. From spear-shaped Pinnacle Rock to the island’s 375-foot volcanic cone, this is a place of lava formations at their most otherworldly. That the island is totally uninhabited only adds to the strangeness.

Magnificent frigatebirds and blue-footed boobies: such are the most famous inhabitants of this small island near Baltra. With their neck-spreading and wing-spreading mating rituals, these comical birds are some of the Galapagos’ top crowd-pleasers. But don’t skip the cliffs, which are home to large flocks of pelicans and swallow-tailed gulls. Iron-rich lava rocks give this small island its striking red color; medicinal palo santo trees cause the red to be spiked with green. When you go, you’ll find flamingos strutting in the bayous, tropical fish darting just off shore, and volcanic craters galore. Note: the bachelor sea-lion colony is a can’t-miss. Just follow your nose.

Needing a shot of color? Head to South Plaza during the dry season, when its sesuvium plants turn bright red, orange, and purple. Each year these flowering succulents blanket this small island with a rainbow of hues. There are also beautiful prickly-pear cacti, as well as red-billed tropicbirds and Audubon’s shearwaters for bird lovers. Shuttles from Santa Cruz make this treasure easily accessible. Santa Fe’s claim to fame is its trails. These pass through a sea-lion colony, prickly-pear forests, and steep cliffsides before arriving at the island’s summit, with its lofty views of the interior. Along the way, you’ll bump into Galapagos hawks and Santa Fe land iguanas, which are endemic to the island. Snorkeling sites also exist, for the aquatically inclined.

Small on size, big on sea lions: such is Mosquera. If you’re looking to swim among a horde of these playful mammals, here’s your chance. Just keep an eye out for the orcas, who’ve been known to feed on the lions from time to time. And don’t forget to investigate the coral reefs: they’re teeming with turtles, rays, and tropical fish. For military buffs, Baltra’s main draw is its abandoned World War II air base. But if history’s not your thing, don’t worry: you can still check out the beaches, which are teeming with recently reintroduced marine iguanas. Ferries and cruise ships await to take you to the other islands.

With its squat volcanic cone and broad surrounding fringe, this small island recalls a traditional bamboo hat. But its top draw is offshore: here, in its limpid and surprisingly deep pools, snorkelers can enjoy sheltered coves and varied marine life. On land, an easy trail takes you past lava tubes and bizarre cacti.

This tiny, restricted paradise lives up to its name. Off-limits to shore landings, it can only be explored by inflatable boats called pangas, which allow you to glimpse the colorful fish darting through the shallows. Also visible from the coast: towering cliffs crowded with frigatebirds, lava gulls, and other avian species, as well as mangroves growing from the lava formations. 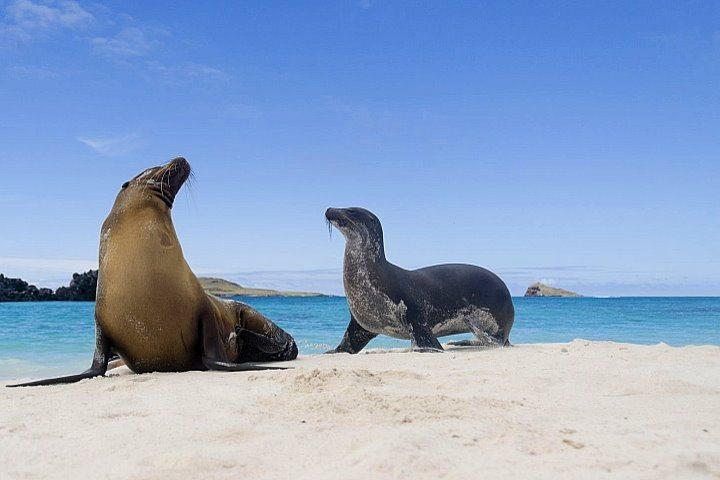