Home » Blog » Pirates, Captains And Castaways: The First Visitors To The Galapagos Charles Darwin is the man most associated with the Galapagos Islands, but he certainly wasn’t the first person to reach this remote and endlessly fascinating archipelago.  Whether by accident or objective, other seafarers had reached the islands before Darwin and the voyage of the HMS Beagle in 1835, with widely varying results and intentions…

In 1953, Thor Heyerdahl visited the Galapagos Islands.  He and his team identified 16 archaeological sites during a two month study.  What they found has long been a subject of debate.  They discovered a flute and hundreds of pottery shards that dated back to the pre-Inca (possibly Inca) period.  How, then, did these items get to the Galapagos?  Pedro Sarmiento de Gamboa, a Spanish explorer and chronicler, claimed that the early Inca ruler Túpac Inca Yupanqui, who reigned from 1471 to 1493, had reached the islands.  But there is little evidence to support this, and the Incas are not typically considered a seafaring nation.  A more likely explanation is one of pure misfortune: over the years, pre-Colombian (perhaps Inca) fishermen and sailors had been blown out to sea from the coasts of Peru and Ecuador, finally washing up on the Galapagos Islands.

The Galapagos Islands were officially discovered by a Spaniard in 1535, but it wasn’t the most auspicious of occasions.  Fray Tomás de Berlanga, the fourth Bishop of Panama, was sailing to Peru to sort out yet another problem caused by the wayward conquistador Francisco Pizarro.  When the winds dropped for six days, strong currents took his ship off course and eventually to the Galapagos.  In dire need of water, de Berlanga and his men landed on one of the islands.  De Berlanga wasn’t impressed.  In a letter to Emperor Carlos V of Spain, he wrote: “…the earth that there is, is like dross, worthless, because it has not the power of raising a little grass, but only some thistles.”  He also described the local wildlife as “so silly they do not know how to flee.”  His foul mood was understandable, as he and his men were in a bad situation due to the lack of water.  They did manage to find some water on the islands, but lost two men and 10 horses in doing so.  They then set off once again for Peru.

The Good, the Bad and the British

Never inclined to stay out of a little ocean-borne empire building — especially when they could mess with the Spanish — the British soon arrived on the Galapagos Islands.  Captain Richard Hawkins was the first Brit to arrive, setting foot on the islands in 1593.  His intentions were… complicated.  Despite later becoming a Member of Parliament, being promoted to admiral, and receiving a knighthood, Captain Hawkins was initially both an explorer and a pirate.  His favorite target: Spanish galleons weighed down with Inca gold and silver.  Hawkins, like other English captains/pirates over the following 100 or so years, used the Galapagos as a hideout, a perfect location for refitting while preying on Spanish ships.  Later, in 1793, a British Royal Navy explorer and trader named James Colnett sailed to the Galapagos on behalf of the Crown and private whaling interests.  This set off a highly destructive period of whaling, which also devastated the local tortoise population, an easy source of protein for hungry sailors.

Up until 1807, no one had lived permanently on any of the islands — at least, not as far as we know.  Then came Patrick Watkins, an Irish sailor who somehow became marooned on Floreana Island, part of the archipelago.  Watkins was stuck on the island until 1809, when he managed to steal a small boat and sail to Guayaquil, Ecuador.  According to an account by Captain David Porter, who visited Galapagos in 1813 and heard tales of Watkins, the castaway was quite a sight: “The appearance of this man, from the accounts I have received of him, was the most dreadful that can be imagined; ragged clothes, scarce sufficient to cover his nakedness, and covered with vermin; his red hair and beard matted, his skin much burnt, from constant exposure to the sun, and so wild and savage in his manner and appearance, that he struck every one with horror.”  Watkins managed to trade some of his homegrown vegetables with visiting whalers in exchange for rum.  By most accounts, he managed to stay completely drunk for most of his two years on Floreana.

There Once Was a Man from Nantucket…

The British weren’t the only sailors to use the Galapagos as a whaling outpost.  In 1818, Captain George Washington Gardner of the Nantucket whaler Globe discovered prime whaling grounds off the equatorial coast of South America.  This led to a new surge in whaling, and the Galapagos Islands once again became an important stop for whalers, where they could do repairs, resupply, and even drop off letters to send back home.  One whale ship from Nantucket, the Essex, made a stop at the islands in 1820.  For some reason, possibly as a poorly-considered prank, the ship’s helmsman Thomas Chappel set a fire on one of the islands.  It quickly burned out of control, almost killing his fellow crew members and devastating the entire island, quite possibly leading to the extinction of two species: the Floreana Island tortoise and the Floreana mockingbird.  Later that same year, a whale rammed and sank the Essex.  The unusual incident became one of the inspirations for Herman Melville’s Moby Dick.  Melville, incidentally, also visited the Galapagos Islands during his time as a whaler. 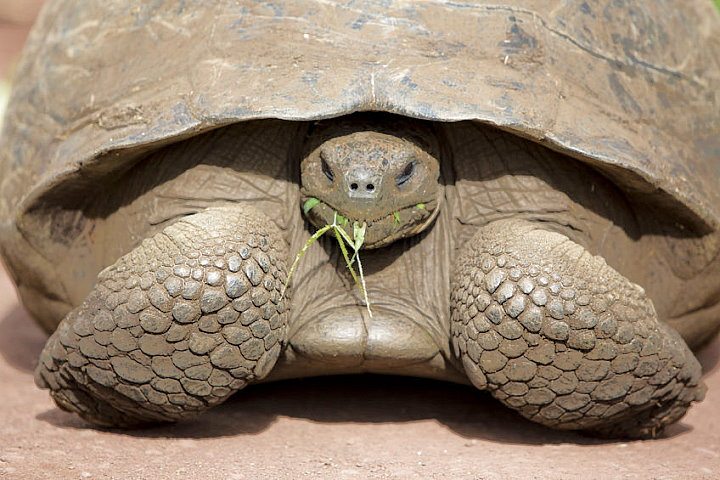