At 9,350 feet above sea level, Quito is the second highest capital city in the world behind Bolivia’s de facto capital of La Paz. But despite the altitude and the surrounding mountains, Ecuador’s capital — population 2.7 million — is far from being a frigid, wind-blasted metropolis.

Situated just a few miles south of the equator, Quito has a pleasantly cool subtropical climate. The fine weather enhances what is already a pretty city — arguably one of the most attractive big cities in South America.

Quito’s historic center is one of the largest, most untouched and best preserved in the Americas. The whole area is a UNESCO World Heritage Site, containing hundreds of historic buildings. Three of the most impressive buildings are the Palacio de Carondelet (Ecuador’s seat of government); the Basilica del Voto Nacional (the largest neo-Gothic basilica in the Americas); and the Cathedral of Quito (the most important Catholic church in Ecuador). The city is also home to an array of lavish colonial churches, including the churches of La Compañía de Jesús, San Francisco, El Sagrario and Santo Domingo.

The cosmopolitan La Mariscal district is a tourist hub with plenty of entertainment options, as well as hip cafés, excellent restaurants, tour agencies, and plenty of places to stay. After dark, La Mariscal becomes a lively nightlife area centered on Plaza Foch, with bars and clubs radiating out from this central square.

Other things to do in and around the city include riding the aerial tramway, known as the Teleférico, from the city center up to Pichincha Volcano. You can enjoy spectacular views from the top, where you’ll also find restaurants, cafes and a few stores.

Another popular attraction is the super-touristy but nevertheless fun Ciudad Mitad del Mundo (Middle of the World City). Located about 16 miles north of Quito, this is where you’ll find the Monument to the Equator — and a whole bunch of tourists straddling what is supposedly the equatorial line. Having one foot in each hemisphere is a great photo opportunity, despite the fact that the actual equatorial line runs about 262 yards further north. Oops. 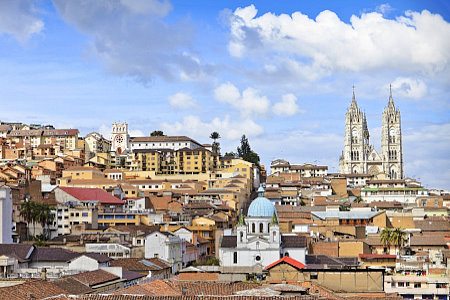