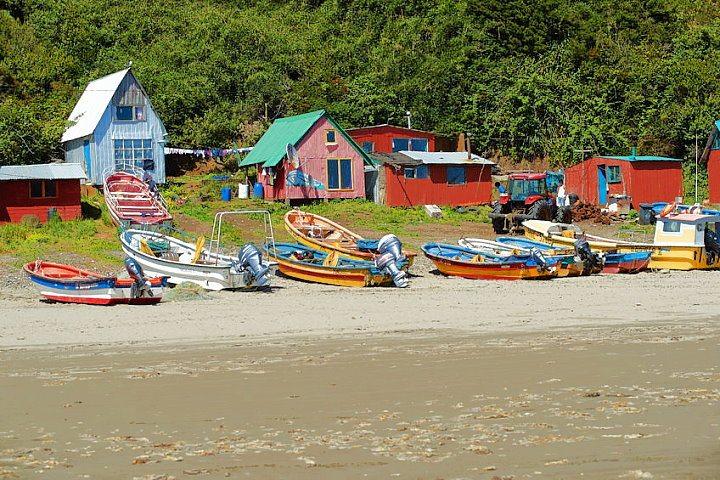 “Now this story—this may well have something inexplicable about it.”

José Rogel is wagging his finger like a professor, dubious but open to persuasion.

“My father told me he’d seen the caleuche.  He’d recently married my mother, and one day he went to a funeral.  It was dark, lots of gray clouds over the sea.  So, he started down the hill, and very close to the beach, there was a ship.  A huge ship, with lots of marvelous lights.”

Rogel pauses to wipe his horn-rimmed glasses.  For nearly all of his 68 years, he’s lived on Cacahué, an island in the Chiloé archipelago in the south of Chile, so he’s used to telling (and hearing) stories like this.  Stories about trolls, demons, or in this case, the caleuche, a phantom ship that haunts the night waters just off the coast, looking to enmesh sinners in a demonic pact.  In Chiloé, fishermen like himself talk about such apparitions as offhandedly as they talk about nets and tackle.

“So my father went to observe it, since it’d stayed there a long time.  It wasn’t moving at all, everything tranquilo, no wind, nothing moving whatsoever.

“Afterwards he went to sleep for a bit, and when he woke up, it was still night.  And what do you think?  No boat.  Vanished.  Maybe they’d grabbed one of the locals.”  He laughs.

“There, you might have something…That’s how it is with the caleuche.”

Rogel’s bemused shrug may express skepticism, but his is a culture alive with belief.  Located more than 700 miles from Santiago, in the midst of a rainy, windswept cluster of islands whose wooded hills and secluded coves frequently recall the Orkneys or coastal Maine more than they do tropical stereotypes of South America, Chiloé is a place where ghost ships, witchcraft, gnomes, and other pagan holdovers are very much part of daily life.  It’s a place that hasn’t really gotten the memo about modern civilization, where folks still use the barter system and turn their livestock loose to graze along the roadside.  Where neighbors keep the keys to the village church in their houses, and where an evening’s entertainment not infrequently consists in telling weird tales around a fire while mists creep through the wetlands outside.

It’s a world, that is to say, whose pastoral surface masks a latent wildness.  The wildness of a fiercely independent people more archaic than contemporary, and more wedded to the whaleroads of the sea than to anything on the mainland. 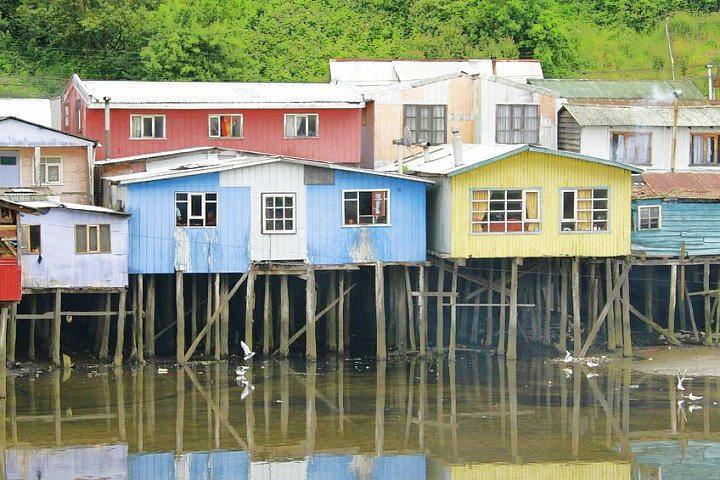 David Pacheco is standing inside a skeleton, inspecting.  Around him jut the ribs from a 50-foot launch, a custom project currently under construction from his shipbuilding firm, Hermanos Pacheco.  He seems satisfied.

“We have our own techniques we use here, techniques that are 1,000 years old.  Really, that began with the indigenous populations on the islands.  So yeah, you ask me if Hermanos Pacheco is something special?  I say yes.”

Such pride is typical of Chilotes, as the islanders call themselves.  It’s also bred of isolation.

Ever since Europeans set foot in the New World, Chiloé’s history has diverged from that of the rest of the continent.  When the Spanish arrived in 1553, they found the islands occupied by two native tribes, the potato-farming Huilliches and the seafaring Chonos.  Subduing the natives came easily enough, but the European intruders on the mainland soon got their comeuppance.  In 1598, they themselves were thrashed by the Mapuches, a fierce tribe from Chile’s southern valley that murdered the Spanish governor and expelled the invaders from all lands south of the Bio-Bio River.

All except Chiloé, which remained the solitary Spanish holding in that austral region for 300 years.

Those 300 years of solitude have visibly shaped the Chilotes’ character.  When Chile declared independence from Spain in 1810, the self-reliant islanders went about their business, unconcerned by grumblings from the mainland.  Even after the Spaniards were expelled from the continent in 1821, it cost the fledgling republic considerable trouble to subdue the archipelago’s last pockets of resistance.  Chiloé was formally made part of Chile in 1826, but its trajectory continued at a tangent from the rest of the country.  Today, Chilotes have their own foods, their own folklore, even their own dialect of Spanish (which can be tough on unaccustomed ears).

They also have, most exuberantly, their own seafaring way of life, upon which the David Pachecos of the region thrive.  Fishing and shellfish-gathering remain central to the Chilote economy, and the locals spend more time in the motorized launches that ferry them throughout the maze of islets than they ever do in cars.  Said launches are assembled by hand in small artisanal shipyards scattered along the coast, using methods that date back to the ancient Chonos.

This nautical theme extends even to Chiloé’s architecture.  Lining the bays and inlets are hundreds of palafitos, houses raised on stilts to weather surges in the tides.  Little daubs of bright red, blue, and yellow, many are today in the process of being converted into trendy boutiques and hostels, in one of the Chilotes’ few nods to the contemporary. In the bus station at Ancud, Chiloé’s gateway town, a malevolent dwarf is waiting.

Trauco, he’s called, and his conical cap and wicked leer are blazoned in day-glo colors on one of the terminal walls.  Trauco’s forest-dwelling ways are legendary throughout the archipelago, making him a kind of mascot for the islanders.

As the story goes, this deformed gnome may dress in rags and communicate only by grunts, but he’s also possessed of a compensating virtue: his breath is irresistible to women.  With it, he lures his victims into the forest and takes their virginity.  Not a few mysterious pregnancies have been attributed to his trollish charms.

Trauco and his ilk reflect another facet of Chiloé’s cultural uniqueness.  When Catholicism arrived on the islands in the 16th century, it did an imperfect job of stamping out the local pagan beliefs.  These popular legends live on in the daily lives of Chilotes today, which always have their admixture of the supernatural.

Witness, for example, the island’s abundant witches.  In Chiloé, these brujos are always male, and frequently serve as arbitrators of social disputes.  Locals are loath to misbehave, lest one of their witch neighbors hex them or their livestock.  Curanderos or shamans are also available to perform rituals and cure simple ailments by means of herbs and other concoctions.  And then there are the monsters, scads of them, that haunt the countryside, frightening the children of the islands—and their parents.  Among the most gruesome: the Invunche, a goblin with one leg bound behind his back and raised on human flesh.

Despite such heterodoxy, however, Chiloé also manages somehow to be Christian.  Indeed, the islets are also home to some of the most striking churches in South America.

When the Jesuits arrived to proselytize the natives in the 1600s, they encouraged them to build houses of worship.  Lacking architectural expertise, the Chilotes improvised.  They took as their models the plans of ships, incorporating hull-like roofs and mast-like spires into their designs.  And since the island’s earth contains no metal, the churches are all wood, held together only by wooden pegs.

Today, touring the islands, visitors marvel at these neo-baroque anomalies.  There are some 150 in all, of which 17 are designated UNESCO World Heritage sites.  Perhaps the most beautiful is San Francisco, with its clean lines and yellow steeples pointing towards the sky.

Where the Wild Things Are

On the northwest coast of Chiloé, at 8 a.m., a crowd is gathered, with binoculars and telescopes.  The mood is expectant, since they’ve got company.

It’s a question of waiting for the guest of honor to surface—literally.  In 2004, a group of scientists and conservationists launched the Alfaguara project, designed to protect the blue-whale population off Chiloé’s northern shores.  Every year, hundreds of the mammoth sea creatures feed there, so that the archipelago afforded them and other cetacean enthusiasts a unique opportunity to study and protect.

Hence the crowd’s anticipation this morning.

As it turns out, Chiloé’s northern coast isn’t the only spot in the peninsula where the wild things are.  All throughout the channels one finds exotic species: sea lions, otters, dolphins, Qetrus, Chilean flamingoes.  Many of the coastal wetlands are home to rare varieties of birds—among them black-necked swans, kelp goose, and Buller’s albatrosses—while the brush of the old-growth rainforest on the island’s south side is abuzz with scurrying, creeping denizens.

There’s also Puñihuil, a national park and biodiversity zone made up of three small islets where Magellan and Humboldt penguins coexist.  On any given afternoon, the tuxedoed inhabitants can be seen waddling and squabbling in their eternal avian hullaballoo.

The archipelago’s wildlife is sufficiently diverse to have attracted the interest of Charles Darwin, who visited in 1834.  (His verdict: lovely people, disagreeable weather. “At this time of year, nothing but an amphibious animal could tolerate the climate.”)

The wildness of Chiloé’s fauna, no less than that of its inhabitants, makes it one of the most surprising corners in a surprising continent.

José Rogel sums it up: “In Chiloé, things are different.” 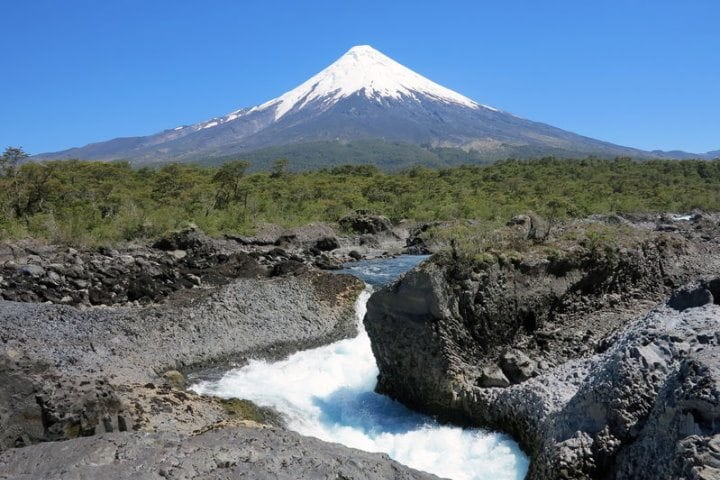