Home » Blog » A Guide To The Main Wine Regions Near Santiago, Chile Santiago is a fine base for tourists with a taste for wine. Many of the country’s best wine-producing valleys and vineyards lie within a 100-mile radius of the Chilean capital, with some just a short ride away.

There’s also an undeniable and appealing sense of history in this New World wine producing region. Vines first came to Chile via Spanish conquistadors and missionaries in the mid-16th century, but it was the French that arguably had the greatest influence on Chilean wine. Wealthy Chilean landowners visited France in the early 1800s and brought back both new techniques and new grapes, including Cabernet Sauvignon, Merlot, Malbec and Sauvignon Blanc.

Today, wineries dot the valleys near Santiago. Some are new, some are old, but all are based on the same rich wine-making tradition. Many offer tours and tastings, and a wine enthusiast could spend days — if not weeks — exploring all the bodegas and viñas surrounding the capital.

The Maipo Valley is the closest wine region to Santiago. So close, in fact, that the city itself now partly extends into the valley, and the major wineries are easy to reach by taxi. More than 7,000 acres of vineyards exist with the Maipo Valley, and more than half of the vineyards produce Cabernet Sauvignon. Vineyards in the Central Maipo also produce Carmenere wines, while some white wines, mostly Sauvignon Blanc, come out of the Pacific Maipo (the valley’s coastal third). Notable historic wineries include Viña Santa Carolina and Viña Cousiño-Macul, both of which offer full property tours. Head about 40 miles west of the capital and you’ll reach the Casablanca Valley. It’s a relatively new wine region, having developed in the 1980s. Coastal breezes keep the climate cool, and morning fogs provide a daily dose of moisture. This distinct climate lends itself to the production of white grapes, particularly Sauvignon Blanc and Chardonnay. Famous cool-climate wineries from this region include Loma Larga, Kingston Vineyards and William Cole Vineyards. Just south of the Casablanca Valley is the San Antonio Valley, which is even closer to the sea than its neighbor. Another cold-climate region, it tends to produce Sauvignon Blanc and Chardonnay, as well as high-quality Pinot Noir and Syrah (thanks to the cooler conditions). San Antonio is one of the newest and most up-and-coming wine regions in Chile. One of the region’s most famous wineries is Matetic Vineyards, which first planted vines here in 1999. In doing so, Matetic became the pioneers of cool-climate Syrah in Chile. Tours and tastings are available at the Matetic winery, and visitors can also stay at La Casona, the winery’s eight-room boutique hotel. Head about 45 miles north of Santiago and you’ll arrive at the Aconcagua Valley, not far from Valparaiso. This wine producing region is set in a rugged landscape of varied textures, with arid cracked soils back-dropped by towering mountains. The climate here is very much seasonal, with cool, wet winters and hot, dry summers. The hot summers were at first believed to be unfavorable to growing wine grapes, but Don Maximiano Errazuriz changed all that in the 1870s. A wine pioneer, he planted the first vines in the valley and the Errazuriz winery continues producing quality wines today. The valley is known for its excellent Cabernet Sauvignon, Syrah and Merlot wines. Located about 50 miles south of Santiago, the climate of the Cachapoal Valley differs from its more northern neighbors. The mountains around Cachapoal shelter the valley from the cool coastal winds, providing a more Mediterranean climate. Many of the wineries sit in the foothills of the Andes to the east of the region, where they can escape the warmer valley floor. The region has a warm and dry summer, providing a long growing season for premium grapes (mainly red). Cachapoal is best known for its Cabernet Sauvignon and Carmenere, but also produces Merlot and Syrah. 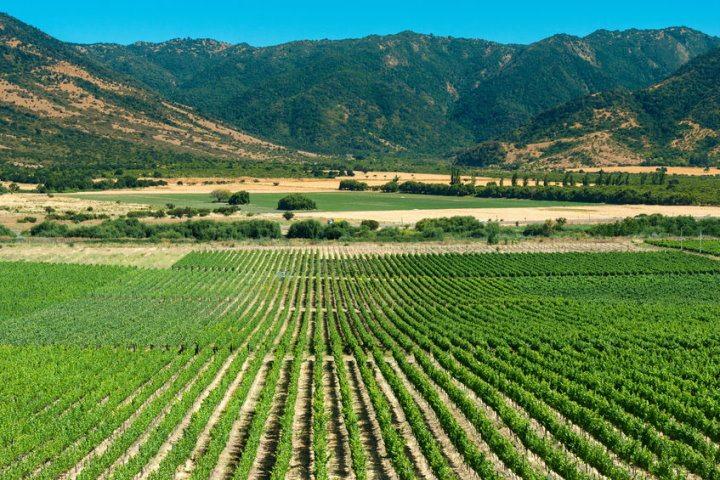 When it comes to terroir — the soil, topography, climate and overall environment in which a wine is produced — the Colchagua Valley has it all. The valley, about 80 miles south of Santiago, has a generally warm climate cooled by ocean breezes; it’s dry but has just the right amount of rainfall and enough rivers to provide moisture. Colchagua is a relatively new wine growing region in Chile, but produces a number of prominent red wines, primarily Cabernet Sauvignon, Carmenere and Syrah. Prestigious wineries in the valley include Casa Lapostolle, Montes and Vina Casa Silva, all of whom offer tours and tastings.

Ten Things To Do In Santiago, Chile
The Best Places to Visit in Chile
From Designers To Dictators: Seven Must-See Museums In Santiago, Chile
Pagan Myths And Wild Nature In Chile’s Isla Chiloé
The Many Marvels Of Chile’s Atacama Desert
Valparaiso: The Jewel Of The Pacific