Alternating Wednesday Departures Throughout the Year

Head to the Central/Eastern Galapagos Islands on this five-day cruise aboard the 16 passenger Treasure of the Galapagos. You will learn about the breeding of giant tortoises and how they can be preserved for future generations on Santa Cruz Island, and observe fascinating creatures, including frigatebirds, blue-footed boobies, and land iguanas on other islands. Highlights include the discovery of the volcanic origins of the archipelago and snorkeling and swimming with wildlife.

Lodging and Meals: This tour includes accommodations for 7 nights (3 nights in Quito and 4 nights aboard the Treasure of Galapagos), and 15 meals (7 breakfasts, 4 lunches, and 4 dinners).

Day 2 (Thu): City Tour of Quito-Middle of the World.

Upon arrival at Baltra Airport, you will pass through an airport inspection point to insure that no foreign plants or animals are introduced to the islands, as well as to pay the park entrance fee of $100 (unless it has been prepaid). A guide will meet you, help you collect your luggage, and escort you on a short bus ride to the harbor.

Charles Darwin Station. Although the great majority of Galapagos visitors come here to observe and appreciate natural wonders, it is also interesting to learn how the protection and conservation of the islands are carried out. The main attractions are the National Park information center, the Van Staelen Exhibition Hall, the Breeding and Rearing Center for young tortoises, and adult Galapagos tortoises in captivity. Overnight aboard the ship. (B,L,D)

Sullivan Bay. Santiago, also called James Island, is located in the western-central part of the Galapagos archipelago. It is the fourth largest island in the archipelago (following Isabela, Fernandina and Santa Cruz). Along with some of the large western volcanoes of Isabela and Fernandina, Santiago is also volcanically active, with many young flows and cones to be seen, particularly along the southern, western, and eastern coasts. These can even be seen from the summit of Darwin Volcano and from space. A number of large eruptions have been reported over the last 2 centuries. Santiago actually consists of two coalesced volcanoes: a typical shield volcano on the northwest end and a low, linear fissure volcano on the southeast end.

Bartolomé Island is situated across Sullivan Bay. It has an altitude of 114 meters, from where we can observe one of the most beautiful sceneries of the Galapagos Islands such as: Volcanic cones, lunar-like craters, lava fields, and the famous Toba formed pinnacle eroded by the sea. There is very little vegetation on this island. It has two breathtaking beaches where marine turtles exist and at the base of the pinnacle, as well as a very small colony of Galapagos penguins. Overnight aboard the ship. (B,L,D)

North Seymour. Seymour is an uplifted (as opposed to volcanic) island and therefore is generally flat and strewn with boulders. There are good nesting sites here for a large population of magnificent frigate birds. Blue-footed boobies perform their courtship dance in the more open areas and swallow-tailed gulls perch on the cliff edges. Despite the tremendous surf that can pound the outer shore, sea lions haul out onto the beach and can be found bodysurfing. Do watch your step as the boobies don’t worry much about where they nest, and you might just step on one. The trees are dotted with male frigate birds trying to attract the attention of the ladies by inflating their bright red skin flaps. They sometimes fly in the air to call more attention to themselves. There’s a circular path that takes you through the island to a beautiful, rocky shore where the waves crash a silvery-blue.

Mosquera Islet is located between Baltra and North Seymour. This is a small islet formed by a geological uplift, with a reef of rocks and coral and a great white sand beach, where lie a big population of sea lions. You can also observe several species of shorebirds. This site offers great snorkeling and swimming. Along the rocks it is common to see the Red Lava crabs and Sally light-foot crabs. Overnight aboard the ship. (B,L,D)

South Plaza is located to the east of Santa Cruz Island, and forms part of a pair of islands known as “Islas Plazas”. Despite its small size, some of the most interesting and outstanding species of the Galapagos are found here. The Plazas land iguanas are smaller than its relatives found at other islands. Throughout the island there are several hybrid iguanas, a result of crossing a marine iguana with a land iguana. They are unique and recognizable at first glance by their black/gray color, with a land iguana’s crest, but face and tail of the marine iguana. The big population of iguanas is due to the presence of “tunas”, their favorite food. Swallow Tailed Gulls nesting in the rugged cliffs are seen along with other sea bids such as: Audubon shearwaters, red-billed tropicbirds, frigate birds and brown pelicans.

The primary attraction of this site is the coral sand beach. It is an excellent place to swim and snorkel. Cerro Brujo is the remains of a tuff cone. It is one of the first sites visited by Charles Darwin. Captain Fitzroy climbed to the top of the hill to scout out reefs. It has an impressive landscape, where it is often possible to see coastal and migratory birds, including pelicans, Blue-footed Boobies, and Swallow-tailed Gulls, as well as sea lions and marine iguanas. At times the lagoon is completely dry and deposits of salt may be found in the bottom. The people of Puerto Baquerizo Moreno used to use the lagoon as a salt mine. Overnight aboard the ship. (B,L,D)

The Galapagos National Park Visitor Center lies close to the port town of Puerto Baquerizo Moreno. The center explains a series of natural circumstances such as the volcanic origins of the islands, their remoteness from the continent, its ocean currents, its special climate, the arrival of different species, and their establishment, among others.

Transfer to San Cristobal airport for your flight back to Quito. Overnight in Quito. (B) Alternating Wednesday departures throughout the year. 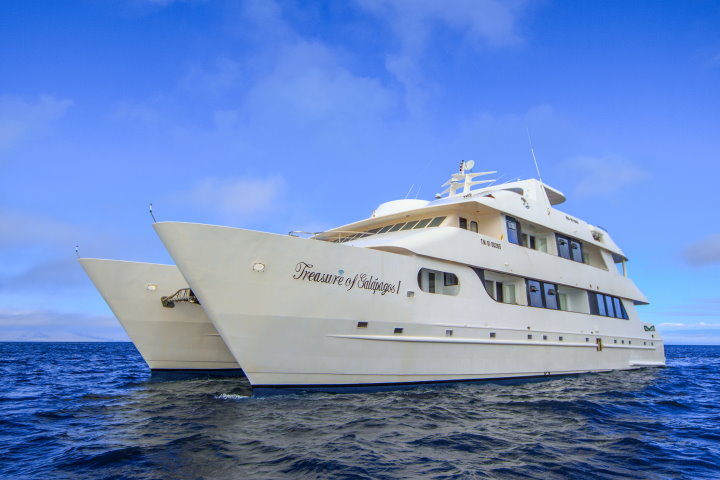 Group Private: All services included in this tour are operated on a group basis except for the airport transfers in and out of Quito on the first and last day of the tour.