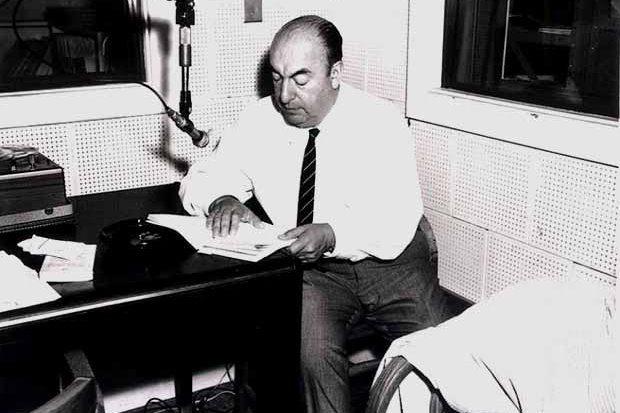 When Pablo Neruda held a house-warming party at La Sebastiana, his hilltop residence in Valparaiso, Chile, in 1961, he did something that left his guests scratching their heads. After inviting everyone to climb the house’s tower, which commands a magnificent view of the Pacific, he tempted them with a bit of voyeurism. There was a neighbor, he said, a woman, who liked to sunbathe, naked, on the roof next door. A real stunner, he said; they could see for themselves with one of his telescopes.

When the prurient party goers peeped, however, there was nothing. The roof was empty.

Several of the guests later returned, and were regaled with the same story. Neruda would stand, looking dreamily off towards the house in question. But no one ever glimpsed the mysterious exhibitionist.

Perhaps they shouldn’t have been surprised. The art of seeing what’s not there is essential to any poet, and it was the basis of Neruda’s verse, which is visionary, rapt, prophetic. But more than that, the anecdote demonstrates other qualities of Neruda’s that made him, among the common people no less than the literati, perhaps the most beloved poet ever to have written in Spanish: his unashamed sensuality, his roguish humor, his joyous hospitality—all deeply felt by his readers, as by his house guests that night in 1961.

Today the same traits are still on display in Neruda’s three houses, which are Chilean national landmarks and meccas for tourists, of whatever level of literacy, the world over. Like Neruda’s poems, many of which grew with vegetal slowness over the years, these houses were assembled piecemeal—a stained-glass window here, a reading nook there—eventually becoming poems themselves, full of the lushness and surreal imagery that mark the poet’s Spanish. They’re colorful and intimate and fantastical and full of crazy jumbles of bric-a-brac. They too were dreamed into existence, just like the elusive sunbather. But they’re also, incontestably, homes, bearing the stamp of real human beings that have lived.

Crossing their thresholds, one enters a magic prism of the imagination, an enchanted realm like that inhabited by children where anything is possible—even happiness. When Neruda returned to Chile from Spain in 1937, he was looking for a place to dedicate himself to Canto General, the ambitious epic that he envisioned as a summa of Latin American history.  He wanted a place near the sea, which he hoped would inspire him.  Eventually he stumbled across a tiny stone cabin along a sparsely populated stretch of coast near the beach side community of El Quisco.  It was there that Isla Negra had its inception.

Right away, the house began to weave itself into the poet’s imagination.  When Neruda hired an architect, Germán Rodríguez Arias, to make additions, he specified elements such as a Mediterranean tower that reminded him of his childhood home in Temuco, in the south of Chile.  The sound of water on its tin roof comforted him, stirred his memory, he said.  Eventually the sea, seen from the house’s windows, would become a central symbol in the poet’s oeuvre, and Isla Negra the house where he would write a large portion of his most significant verse.  A memoir, Memorial de Isla Negra, appeared in 1964.

Today Isla Negra is the most visited of the poet’s houses, the one that most bears the stamp of his personality.  Located on the coast some two hours south of Valparaiso, it’s a crazy hodgepodge of objects the poet collected on his inter-oceanic wanderings.  Figureheads from ships’ prows, matchstick sailboats, barometers, seashells, odd-shaped bottles: a nautical theme predominates.  One room has a loft/balcony fashioned to look like a clipper’s quarter deck.  Another is a stable for a papier-mâché horse brought from Temuco.

In Canto General, Neruda asked to be buried in Isla Negra, but when he died in 1973 the dictator Augusto Pinochet, an old enemy, refused to authorize the interment.  Neruda’s corpse only arrived there in 1992.  It’s buried in the front yard, alongside that of his third wife, Matilde Urrutia.  A nearby flag bears his emblem: a fish. Urrutia was also the motive for another architectural project of Neruda’s.  The couple met when the poet was in Mexico in 1949, beginning a secret affair not long after (Neruda was already married at the time to Delia del Carril, an Argentine).  When Neruda returned to Chile, he wanted to set Urrutia up in a house in Santiago.

One day, while walking through the hills in the city’s suburbs, the pair came across a plot of land for sale next to a small waterfall.  Enchanted, Neruda bought it and had Rodríguez Arias, the same architect who built Isla Negra, construct another home for him.  La Chascona, he named it, from the quechua word for “disheveled” (Urrutia had a thick reddish mane).

The house grew organically, like Neruda’s poems.  At first, there was only the living room and a bedroom; later, a dining room and kitchen were added; last came the bar and library.  Neruda would whimsically decide that he liked a particular decorative element—a painting, a loveseat—and work it into the general, improvised design.

Today the house, though smaller than Isla Negra, contains the same assortment of fantastic objects that is Neruda’s signature: huge shoes, butterflies, whiskey bottles.  There is also a small art gallery, complete with African carvings, and a portrait of Urrutia by Diego Rivera, in which the poet’s profile is faintly visible in the hair of his then-secret lover.

The house was vandalized by pro-Pinochet thugs after Neruda’s death in 1973.  The windows were smashed and the nearby canal blocked so that the house flooded during the poet’s wake.  Tour guides today point out the site of the damage, as a reminder of the poet’s passionate political commitments. In 1959, Neruda started looking for a house in Valparaiso to escape from the urban sprawl of Santiago.  He wanted a place that was isolated, but not too much so; original, but comfortable; sumptuous, but cheap.  As with Isla Negra, a view of the sea was fundamental.

Eventually some friends found a half-completed structure in Cerro Florida that had been designed by Sebastián Collado, a Spanish captain who had died in 1949.  Neruda liked the house’s crazy aspect—it looked vaguely like a ship’s cabin—but it was too big.  So he decided to share it with friends, a Dr. Francisco Velasco and his wife.  The couple took the basement and the bottom two floors, while the poet took the top two levels and tower.  La Sebastiana, he named it, in honor of the dead captain.

The house quickly became Neruda’s favorite place to spend New Year’s Eve: it gave him a perfect vantage point from which to see Valparaiso’s spectacular end-of-the-year fireworks.  He also made it a shrine to some of his poetic idols.  While installing a life-size photo of Walt Whitman in his study, he was asked by a worker if it was his father.  “Yes,” Neruda replied, “in poetry.”

Today La Sebastiana is the airiest of Neruda’s houses: the huge picture windows and bright colors give it an aspect of eternal sunshine.  The same marine theme is evident, in the collections of nautical maps and paintings (including one of Lord Cochrane).  But today the ground floors formerly occupied by Dr. Velasco have been converted into a museum, complete with shops and a café.

Dr. Velasco used to tell a strange story about La Sebastiana.  One day after the poet’s death, he came home and found an eagle trapped inside the house.  He opened the door to let it out, utterly dumbfounded as to how it got in, no doors or windows being open.

Then he remembered a conversation he’d once had with Neruda, in which the poet had told him that in another life, he’d have liked to be an eagle.  The good doctor was left scratching his head—just as he’d done in the non-presence of the mysterious sunbather.