When the dreadlocked guy in front of me launches into a fusillade of back flips, that’s when I wonder if I’m doing something wrong.

Okay, maybe not wrong exactly, but given the volleys of joyful activity all around me—samba dancers shimmying, youth with side-slung drums rapping out infectious tropical beats—my saunter down Av. Lafayete Coutinho is definitely looking rather staid.

That’s because here in the streets of Salvador da Bahia, Brazil, celebrating is a mode of being.  Beside me, two women in white head wraps are laughing uproariously, shaking their hips as hoops of gold flash against their cheekbones.  Up ahead, a kid on a BMX pops a wheelie.

What’s got everyone so joyful is the Lavagem do Bonfim, a procession where sacred and profane are so crazily jumbled up, so hopelessly confused amidst the bells, banners, flower girls in hoop skirts, waving politicians, peddlers hawking capirinhas from coolers, Jesus placards, and mardi gras-style beads that it’s hard to tell where the pious pilgrimage ends and the raucous street party begins.

That pilgrimage covers over five miles every January, starting at the church of Nossa Senhora da Conceição near the shore.  From there it winds through a crazy maze of neighborhood streets before reaching Nosso Senhor do Bonfim, an 18th-century cathedral beloved for its inclusiveness: there, the tradition goes, God offers protection even to non-Catholics.  Upon arrival, the white-clad, barefoot baianas scrub down the steps with perfumed water, in a ceremony some 200 years old that started, so legend has it, when black slaves imitated preparations for a Catholic feast that falls on the following Sunday.

There’s a hitch, though.  The church’s doors won’t be opening during the Lavagem.

For this parade isn’t merely a celebration of Catholicism, but also of candomblé, the syncretic religion that grew out of African tribal beliefs brought to Salvador during Brazil’s slave trade.  Yoruba and Bantu ancestor worship, native-American animism, a light sprinkling of Christianity: all these influences melded to produce a popular faith that, to this day, the Church refuses to recognize.

Not that that’s stopping any of the pious partygoers today, as they abandon themselves to the pulsating grooves around me.

Candomblé and the Lavagem are perfect instances of the African heritage that makes Salvador de Bahia so distinctive.  With approximately 70 percent of its 2.5 million residents having African roots, the city is the heart of black Brazil, a fact abundantly apparent in its traditions, food, and music.  It’s also uniquely festive, even by Brazilian standards: concerts and dance shows are nightly events in the downtown.  Add to that its history as a jewel of the colonial sugar trade, and its sparkling blue waters along the beaches of Porto da Barra, and you have one of South America’s most vibrant and intriguing destinations—what locals call, convincingly, the “capital of happiness.” 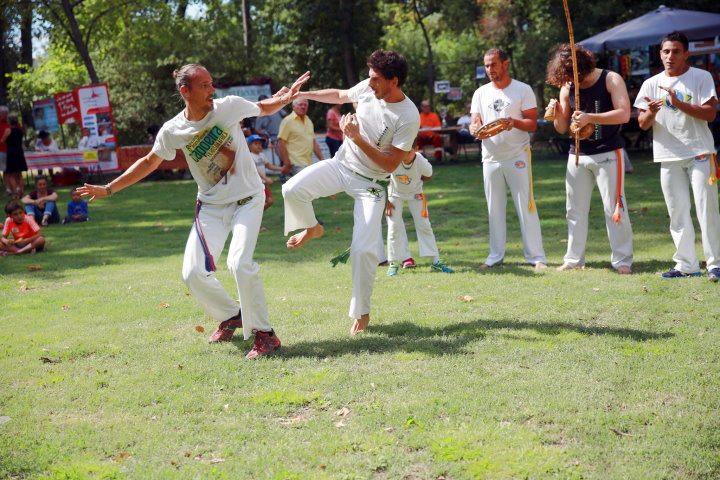 I’m in church, staring at a bare-breasted woman.  Surprisingly, no one else seems to be paying her much attention.

That’s probably because of the important work she’s doing.  As a caryatid—a female statue carved into a column—her job is to hold up the pulpit.  This despite her evident pregnancy.

The fleshliness of statues like her is just one of the surprises awaiting those who visit the Igreja de São Francisco, Salvador’s most striking church.  Built in the late 17th and early 18th centuries, this baroque confection is a testament to the opulence of Bahia’s colonial heyday—and the slave labor that made it possible.

That opulence began not long after the city’s founding in 1549.  The explosive growth of sugarcane along the coast turned Salvador into a commercial dynamo, churning out some 7,500 tons annually at its peak, and enriching the local planters in the process.  Those sugar barons wanted to flash their newly acquired wealth, so they funded the construction of churches and other architectural magnificences.  In the Igreja’s interior, the eye is deluged by hand-painted azulejos (blue-and-white tiles), silver chandeliers, ornate wood carvings, gold leaf everywhere.

To maintain that wealth, however, the planters also had to import millions of African slaves.  That’s where São Francisco starts to get interesting.

Take the angels sculpted into the interior woodwork, for example.  Some of them sport massive genitalia, or distorted, scowling faces.  Others, like the pulpit’s caryatid, are voluptuously pregnant—hardly the virginal cherubs of chubby-cheeked tradition.  These touches were added by the African artisans who did the drudgework of filling in all the church’s details.  Were they importing elements from their native Yoruba mythology?  Or slyly sabotaging the orthodox propriety of a church that condemned the religion of their fathers?

Whatever the scholars may conclude, the strange mixture of elements is what makes São Francisco’s baroque so haunting.  It’s neither Portuguese nor African, but a strange hybrid of both.

That same Bahian fusion is evident when I walk out to the nearby Terreiro de Jesus, the city’s main square.  Here a troupe of youths is practicing capoeira, the whirling martial-arts ballet performed all over Brazil, but which has especially deep roots in Salvador.

Clad in white pajama bottoms and nothing else, the two combatants are a high-speed blur: cartwheels, handstands, dervish-like rotations, leaping scissor kicks in which they come perilously close to colliding in midair—yet never do.  The moves’ purpose?  To defend escaped slaves from hunters who pursued them into the sertão, Brazil’s vast uncharted backland.

So dangerous was capoeira considered by authorities that they banned it for 50 years, from 1890 to 1940.  Today, though, the art is celebrated on every street corner, as Bahia continues to rediscover and rejoice in its African heritage. 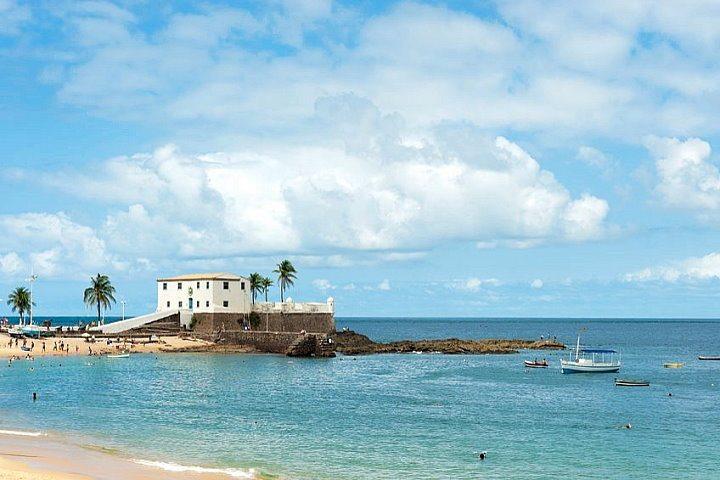 The afternoon is getting on, so I decide to head to the beach.  My mode of transport?  A 400-year-old elevator.

The Elevador Lacerda is in itself a piece of Salvador history.  Dating from an early rope-and-pulley setup installed by the Jesuits in 1610, this funicular is today an art-deco gem, descending 240 feet in 30 seconds to deposit commuters gently on the shore.  It’s necessary, because Salvador was founded on two different levels: an upper, administrative center, home to the Pelourinho or colonial downtown, and a lower, commercial area, home to the city’s beaches and frenetic port.

The lower city is especially bustling today, so after hopping off, I stroll over to the Mercado Modelo to see what’s on sale.  Formerly the site of slave auctions, this 19th-century customs house was rebuilt into a tourist market in 1986, with all the usual gewgaws—ceramic statues, jewelry, you name it.

It’s what’s outside, however, that’s making my mouth water.  Here there are rows of vendors, their carts overladen with exotic fruits hard to find elsewhere in Brazil, let alone the rest of the world.  Seringuela, acai, pitanga, umbu: the unfamiliar names conceal flavors that are alternately sweet and subtle—and wholly typical of Salvador’s tropical lushness.

My hunger whetted, I also take this opportunity to snack on acarajé, the shrimp-and-bean fritters that are Salvador’s signature street food.  Brought over by West Africans and fried in huge vats of boiling dende oil that percolate on seemingly every corner, these snacks resemble empanadas overstuffed to the point of bursting.  The ones I buy from Adalberto, a bespectacled older cook, have just the right amount of zip.

At this point I’m feeling a little heavy, so walking along the bay shore to finish out the day at the beach is looking mighty attractive.

Salvador’s Bahia de Todos os Santos, with its amazingly limpid waters and dark sands, was discovered on All Saints’ Day, 1501, when Amerigo Vespucci landed here on a scouting mission with the Portuguese.  (His name would later christen not one but two continents.)  The outpost left by that voyage became first a commercial settlement, then a town, and, in 1549, as São Salvador da Bahia de Todos os Santos, the colonial capital of Brazil, a title it would hold until 1763.

The stretch of coast I’m now arriving at, the Porto da Barra, is one of the most exquisite the bay holds in store for sun-lovers.  Voted one of the world’s ten most beautiful beaches by Britain’s The Guardian in 2007, its gently curving cove is bracketed by a white colonial fort at one end and a whitewashed hilltop church at the other.

To the west, the sun is sinking.  A high-pitched yell: two boys are diving off the old stone walls at the harbor’s mouth.  Further out, a fishing boat bobs with the tide.

As I sit on the sand, hugging my knees and looking out to sea, a lanky, extremely tall old man with a floppy fisherman’s hat is sitting nearby.  Gilberto Gil’s “Eu vim da Bahia” is playing on his small transistor radio.

“Esta vida é boa,” he says, nodding, not looking at me.  This life is good. 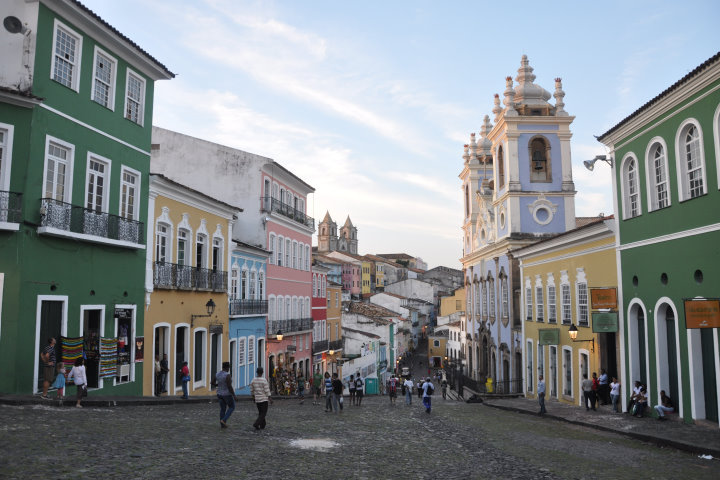 Ten Things To Do In Rio De Janeiro, Brazil
Pantanal Wildlife: 8 Mammals That You Are Likely To See
The Best Places to Visit in Brazil
The 6 Best Beaches In Rio De Janeiro
Iguazu: The Most Beautiful Waterfall On Earth
Manaus, Brazil: Unlikely Heart Of The Amazon