As you walk through the Amazon Rainforest, amidst the cacophony of noises and endless shades of green, there are few things more exciting than the thought that you might spot one of the jungle’s feline inhabitants. And while it’s rare indeed to see one of these stealthy cats in the wild, just knowing that they’re out there is one of the greatest thrills during a trip to the Amazon.

The jaguar (Panthera onca) is the largest cat species native to the New World and the third largest in the world behind tigers and lions. It’s a powerful creature, an ambush predator that sits at the top of the food chain. The jaguar is a skilled climber and can hunt in the trees when necessary, but ideally will take its prey, including deer, capybara, tapir and sloths, on the ground. And when it has its target in range, it can use its mighty bite – the strongest of any big cat – to pierce and crunch the skull of its prey. In the pre-Columbian civilizations of South America, such as the Chavín and Moche cultures of Peru, the jaguar was the preeminent symbol of strength and power. 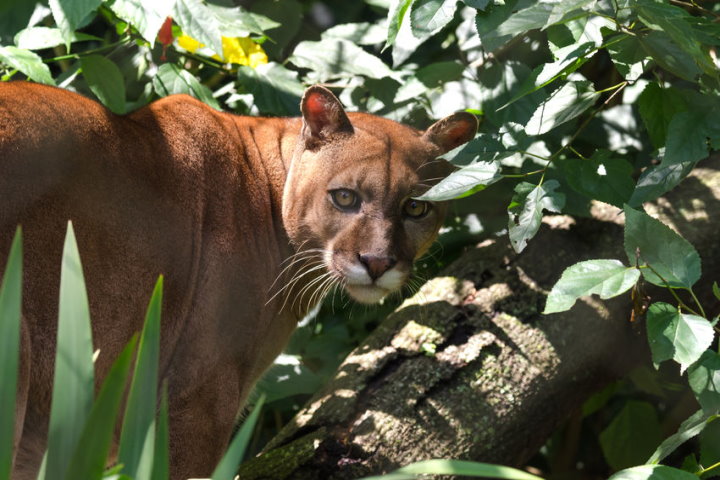 Things get a little confusing with the puma (Puma concolor) simply because it is known by so many different names, including cougar, mountain lion, and panther, among others. The wide range in names is down to its own geographic range, which is the widest of any large wild terrestrial mammal in the Western Hemisphere, stretching from Canada to the southern Andes of South America. The puma is the second largest cat in the Americas after the jaguar, and like the jaguar it is a reclusive ambush predator who will happily climb into the rainforest canopy in search of prey. The puma, however, has more in common with domestic cats, including the inability to roar. They also have plain coats, lacking the rosettes typical of the jaguar. Despite its name, the jaguarundi (Herpailurus yagouaroundi) is most closely related to the puma rather than the jaguar. These small wild cats are native to southern North America and South America, with an extensive range of habitats including the Amazon Basin. Adult jaguarundis measure between 53 and 77 cm in length, with tails between 31 and 60 cm – so not much bigger than a large domesticated cat. They are adaptable in both habitat and diet, but typically prey on rodents, small reptiles and ground-feeding birds. They also make a remarkably wide range of vocalizations, including purrs, yaps, whistles and bird-like chirps. The ocelot (Leopardus pardalis) is a small wild cat native to parts of North, Central and South America. These beautiful cats are highly adaptable and can live in a range of habitats, including mangrove swamps, savanna and the Amazon Rainforest. Its fur gives it a jaguar- or cheetah-like appearance, but the black markings are normally in stripes or bands. Ocelots are heavier than jaguarundis but similar in length, measuring between 55 and 100 cm with tails between 25 and 41 cm. They are solitary creatures normally active at night, spending their days resting in dens beneath large trees. When hunting they will prey on small mammals, rodents, birds, fish, insects and reptiles. 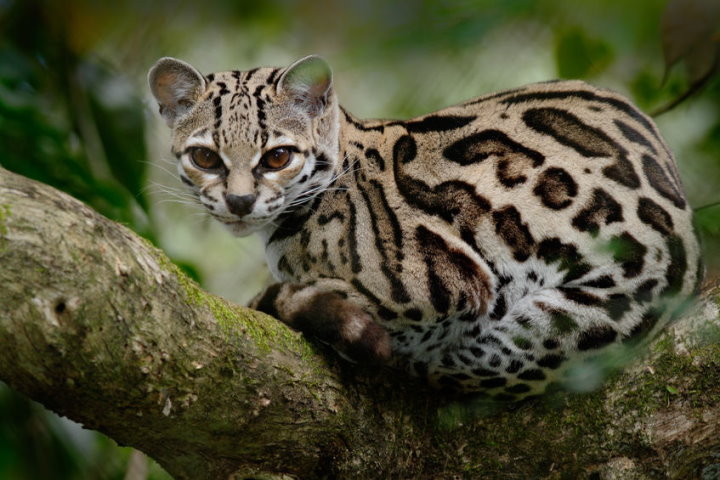 The margay (Leopardus wiedii) looks very similar to the larger ocelot, but with a slightly shorter head, larger eyes and longer legs and tail. One particularly notable difference between the two species is the margay’s superior climbing ability. It’s an incredibly agile cat and one well suited to a life in the trees, chasing after birds and monkeys (unlike the ocelot, which mostly hunts its prey on the ground). Many margays will spend most of their lives off the ground, and have adapted to life in the treetops. They are one of only two cat species in the world that have ankles flexible enough to allow them to climb down trees head-first. They are also capable of jumping almost 4 meters horizontally. The oncilla (Leopardus tigrinus), also known as the tigrillo in South America, is again similar in appearance to the ocelot and margay but is the smallest of the three species. It’s slightly longer than an average domesticated cat, but weighs less at just 1.5 to 3 kg. Like a typical house cat, it stalks from range and then pounces to catch and kill its prey, which may include small mammals, small birds, lizards, tree frogs and eggs. Oncillas are the most threatened of all the cats in the Amazon Rainforest and are currently listed as vulnerable. Oncilla pelts are highly prized making them a target for poachers. Deforestation and habitat loss only serve to exacerbate the delicate situation of this small but beautiful wild cat.