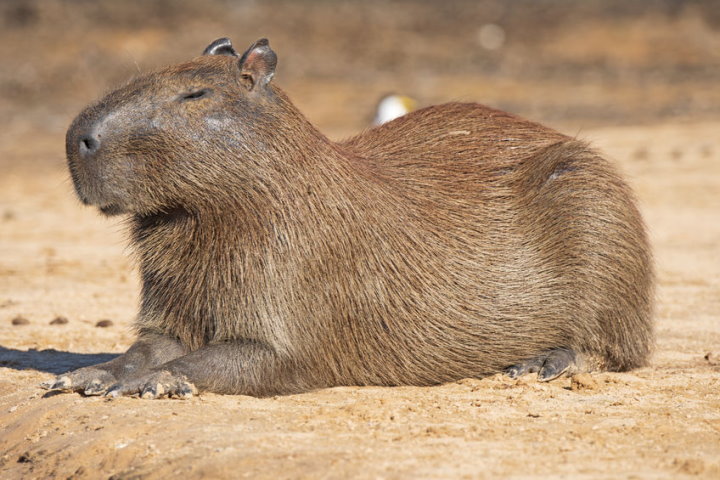 Capybara on a River Bank in Pantanal National Park, Brazil

The capybara (Hydrochoerus hydrochaeris) is a large rodent native to South America. These loveable creatures are particularly numerous in the Pantanal of Brazil and the seasonally flooded grasslands of the Llanos in Colombia and Venezuela, but can also be found in Peru, Argentina and Uruguay. They prefer to live in forested areas near rivers, lakes, swamps and marshes, as well as seasonally flooded grassland and savanna. Wherever they are, they are normally easy to spot thanks to their large size, large social groups and very relaxed nature.

1. The capybara is the world’s largest rodent

If you thought the beaver was a big rodent, wait until you see a capybara. Weighing between 75 and 150 pounds, adult capybaras are twice the size of North American beavers. They are the undisputed heavyweights of the rodent world, measuring between 3.5 and 4.4 feet in length and standing at least 24 inches at the withers.

2. The capybara’s diet is kind of weird

Capybaras are herbivores and spend much of their time grazing on grasses, aquatic plants, fruit and tree bark. Sounds pretty normal so far, right? Well, wait until you see what they eat for breakfast. In the morning, capybaras feast on their own feces. The poop is rich in proteins thanks to all the microbes digested the previous day. By eating it, the capybaras are basically getting a second helping from the previous day’s grasses, which are tough to digest fully the first time around. Whenever you see a capybara, you can be pretty sure there’s water nearby. These semiaquatic rodents love the water: when it’s hot, they wallow in it, and at night they sleep in it — with their noses in the air. They’ll also only mate in the water, which is handy for any females who aren’t in the mood. If a female doesn’t like the look of a particular male she’ll simply leave the water or submerge, giving the unfortunate male no option but to try his luck elsewhere.

4. And are strong swimmers

Like beavers, capybaras are excellent swimmers. Despite their pig-like proportions, their bodies are well adapted for life in the water. Their toes are partially webbed to help them paddle around, and their long, brown fur dries out quickly when they return to land. And like many other semiaquatic species, their eyes, nose and ears are located high up on their heads, allowing them to breathe, see and hear while their bodies are underwater. If necessary, they can also hold their breath underwater for up to five minutes, useful for hiding from land-based predators. 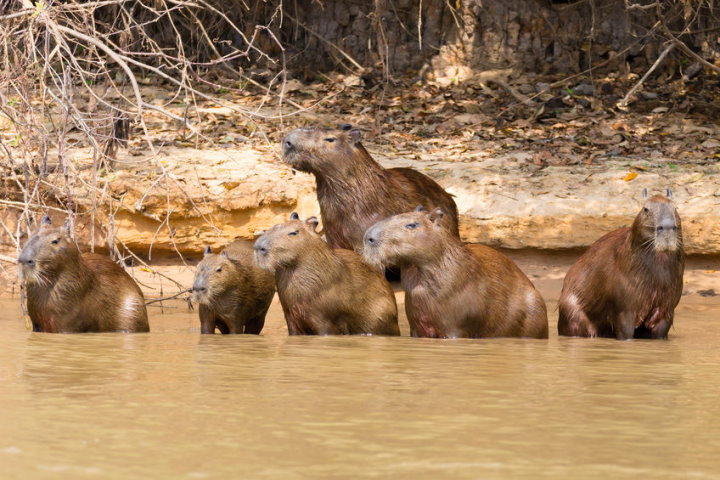 Capybaras tend to live in groups of 10 to 20 individuals. During the dry season, these groups may increase to 50 or 100 when the capybaras gather together near remaining bodies of water. While the males are rigidly hierarchical and often fight among themselves for dominance, the rest of the group gets along just fine. The females are highly cooperative and will even nurse and protect each other’s young.

6. Capybaras are surprisingly relaxed with other species

As well as being sociable among themselves, capybaras are also happy to hang out with other species, as these beautiful photos show. They are often seen giving piggyback rides to all kinds of other creatures. It’s not uncommon to see birds, turtles and even monkeys sitting peacefully on the back of a capybara, with the capybara seemingly happy to oblige. 7. Jaguars are the main threat to adult capybaras

Capybaras have to remain alert, as they are the meal of choice for prowling jaguars. And when they’re in the water, they have to be wary of anacondas. Adult capybaras also have to keep an eye out for a variety of animals that prey on their young. These threats come from the land, the water and the sky. Pumas, ocelots, eagles, caracaras, caimans and boa constrictors all prey on vulnerable young capybaras.

9. The Pope once declared the capybara to be a fish

In the 18th century, Spanish missionaries found that many indigenous communities in Venezuela, Colombia and Brazil relied heavily on capybara meat as a source of protein. The missionaries weren’t entirely sure what the semiaquatic creature was, and began to debate whether it could be eaten during the meat-free fasting of Lent. They wrote to Rome, describing the strange aquatic animal, which they also noted had a salty, fish-like flavor. The Pope, who had never seen the creature, promptly issued a Papal Bull declaring that the capybara was indeed a fish, and could therefore be eaten during Lent. To this day, capybara is a traditional meal eaten during Lent in Venezuela.

10. Capybaras have moved to Florida

Capybaras were first spotted roaming around Florida in the 1990s, probably having escaped from a private owner (some people keep capybaras as exotic pets) or small zoo. Capybara sightings are now quite common in Florida, although an actual breeding population has yet to be confirmed. There is evidence, however, that they have started breeding, prompting concerns that they move from being an “observed species” to an “invasive species.” But for now, the 100 or so capybaras believed to be living in Florida are just doing what they normally do: chilling out and minding their own business.