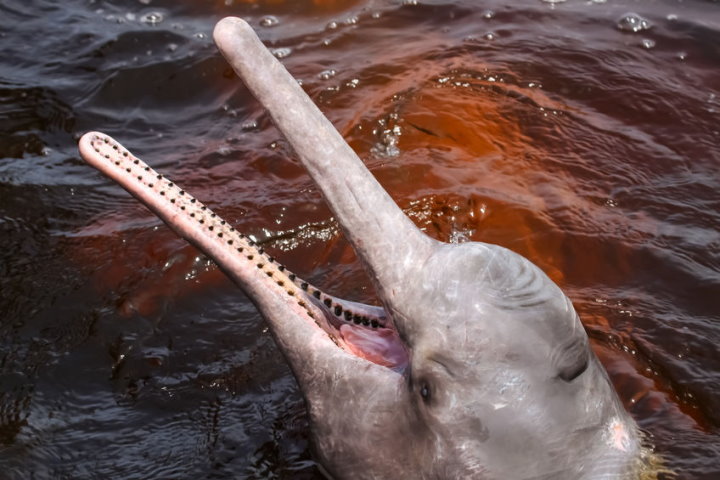 The Amazon river dolphin (Inia geoffrensis) goes by various names. In English, it’s often called the pink river dolphin due to its pinkish coloration, although some are shades of gray. In Spanish it’s known as the delfín rosado, or in Colombia, Ecuador and Peru as the bufeo colorado. In the Brazilian Amazon, meanwhile, the name boto cor-de rosa (or just boto) is used for these charming but enigmatic dolphins.

Despite the varying names, one thing remains constant: the pink river dolphin retains a semi-mythical status throughout the Amazon Jungle, thanks to the colorful legends that have sprung up around it.

Shape-shifting seducer of the night

One of the most pervasive legends in the Amazon is that of the shape-shifting river dolphin. According to this legend, at night the dolphin morphs into a tall, handsome and elegantly-dressed man. The man, dressed all in white according to some versions and sometimes wearing a hat (to cover his blowhole), steps ashore and sets out to seduce the wives and daughters of the Amazonian villages. Some say he goes to local fiestas and charms the most beautiful girl at the party. He then impregnates the woman, before returning to the river when the sun comes up. In some versions, the woman remembers nothing about it — and then comes her unexpected pregnancy.

The myth of the morphing river dolphin, a creature known as an encantado, has long been used – and still is used – in isolated parts of the Amazon as a cover story for unwanted or scandalous pregnancies, be they the result of a clandestine affair, an act of incest, or other illegal or dishonorable deed. In the Brazilian Amazon, a fatherless child is still often called a “child of the boto.”

The underwater city of Encante

Another legend serves as a warning to children of the perils of going swimming in the river alone. According to this myth, the pink river dolphin, again sometimes in human form, will take lone swimmers – children and adults, men and women — to the mystical underwater world of Encante, from which they can never return. On the positive side, the sub-aquatic realm is often described as an Atlantis-like paradise, not too dissimilar to the real world but better in every way.

Guardian of the Amazonian manatee

In the often murky waters of the Amazon and its tributaries, it can be hard to spot an Amazonian manatee. Furthermore, these slow-moving, blubbery but beautiful creatures are classified as vulnerable, their population at risk from hunting and habitat loss, which makes them all the more difficult to see in the wild. According to local legend, the pink river dolphin is the guardian of the manatee. And if you want to see one, you first have to make peace with the river dolphin, who will then grant you access to the manatee.

A revered and sacred creature

One of the reasons why the pink river dolphin has not yet reached endangered status is the reverence it commands in certain parts of the Amazon. It is considered a sacred creature by many indigenous Amazonians, and killing one, whether intentionally or by accident, is thought to bring a great deal of bad luck upon the killer. Even more bad luck will rain down upon anyone who eats a river dolphin.

A lifetime of nightmares

If you point out a nearby river dolphin to a local fisherman, don’t be surprised if they refuse to look. In some parts of the Amazon, making direct eye contact with a river dolphin is a perilous thing indeed. It will unleash a lifetime of nightmares, forever damning you to terrible dreams and nights of frightful dolphin-induced visions.