Patagonia is home to more than 460 species of birds, from flightless rheas to tiny owls to massive Andean condors. Understandably, therefore, both Argentine and Chilean Patagonia attract birdwatchers from across the globe.

Of the hundreds of bird species that live in the region, a handful can be considered the most iconic: the most representative of Patagonia’s rugged but ever-inspiring landscapes…

You can see a range of penguins in Patagonia, including Humboldt, gentoo and even king penguins. But the most emblematic are the Magellanic penguins, who arrive in Patagonia in mid-September to build nests and breed. The couples stay until mid-April, when their young are hatched and old enough to move on. Hundreds of thousands of breeding pairs come to Chilean and Argentina Patagonia each year, making it one of the best places to see penguins in South America. With its vast 10-foot wingspan, the Andean condor is one of the largest flying birds in the world. Andean condors are scavengers who feed mainly on carrion. You’ll see them gliding on thermals in search of a meal, then swooping to feast on the remains of guanacos and other mammal carcasses. The IUCN Red List estimates the Andean condor population to be at least 10,000, and considers it “near threatened.” Some of the best places to spot Andean condors in Patagonia are Torres del Paine National Park and other areas of Andean Patagonia. Never underestimate the crested caracara. These aggressively opportunistic falcons — the second largest in the world after the gyrfalcon — typically feed on carrion, but won’t hesitate to steal food from other birds of prey. They’ll also pillage the nests of other birds, and will hunt and kill small mammals, young birds, snakes, grubs and insects. The crested caracara is easy to identify by its yellow legs, yellow or orange face, and flat head. 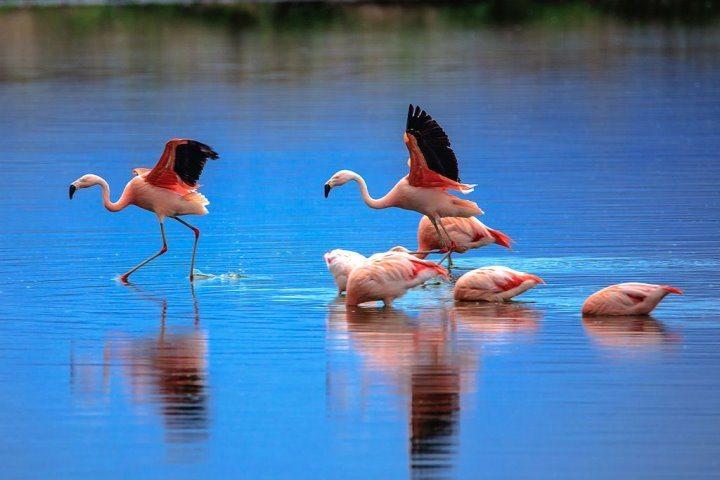 The Chilean flamingo is arguably the most graceful of all the Patagonian birds, and seeing a flock take flight is an impressive sight indeed. Most of the time, however, you’ll see them standing in shallow lakes, using their specialized bills for filter feeding. The flamingo derives its striking pink color from pigments contained within the algae and plankton on which it feeds. You can see Chilean flamingos in the Aysén and Magallanes Regions of southern Chile. In stark contrast to the penguins of Patagonia, the lesser rhea — also known as Darwin’s rhea — is a real speedster on dry land. This large flightless bird can reach speeds of almost 40 mph, making it a hard target for most predators. And if it does get cornered, the lesser rhea has sharp claws on its toes, and muscular legs with which to wield them. Lesser rheas roam the Patagonian grasslands in groups of up to 30 birds, grazing on grass, cacti fruit and an occasional lizard or grasshopper. Steamer ducks are strange birds. Four species live in Chilean and Argentine Patagonia, all of which are flightless except for the flying steamer duck, who still prefers to remain on the water rather than take to the air. Steamer ducks use their wings — as well as their feet — to swim across the water, giving them a paddle steamer-like appearance, hence the name. Good places to spot steamer ducks include the Beagle Channel in the far south of Patagonia, and further north in the Chubut Province of Patagonian Argentina. If you like owls, then you’ll love the austral pygmy-owl. This tiny owl has a head that looks slightly too big for its body, bright yellow eyes, and an altogether charming appearance. The only problem is spotting it, but if you listen out for its high-pitched, sometimes screeching, sometimes tooting call then you might be able to locate it. Austral pygmy-owls favor the nothofagus (southern beech) forests of Patagonia, but you might come across them in suburban areas and sometimes even in city parks.