Home » Blog » Five Things To Do In El Calafate, Argentina 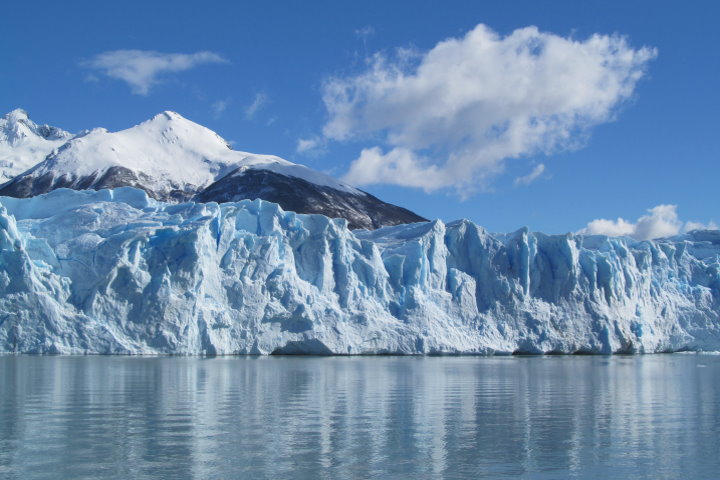 The town of El Calafate (pop. 20,000) is the tourist hub for exploring Los Glaciares National Park, the largest national park in Argentina. The park is named after the numerous glaciers that exist in the region, and which have helped carve out the stunning lakes and landscapes around El Calafate. So if calving glaciers, dazzling icebergs and fantastic treks are you kind of thing, you’ll soon fall in love with this Patagonian town on the banks of Lago Argentino.

Perito Moreno Glacier is one of the most important attractions in Argentinian Patagonia. People come to marvel at the mighty glacier, and to watch huge chunks of ice calve off the nearly 200-foot-tall glacier and collapse into the Canal de los Témpanos.

Many tourists take the bus from El Calafate to Perito Moreno and then view the glacier from lookout points. And while this offers a fine view of the glacier, there are ways to get even closer. One of the most popular alternatives is to board a boat for a one-hour tour, during which you’ll come close to the glacier’s southern wall.

If you want to get even closer, you can actually walk on the glacier itself. You’ll have to don some crampons once you’re on the ice, after which you can walk out across Perito Moreno, exploring the strange formations, small lagoons, gullies and crevasses that form this otherworldly landscape. This “mini-trekking” experience is restricted to people between 10 and 65 years old, with some further restrictions depending on a person’s physical condition. 2. See More Glaciers with a Cruise on Lago Argentino

El Calafate sits on the southern shores of Lago Argentino, the biggest lake in Argentina. The lake is fed by glacial meltwaters, and massive icebergs float across the water. Boat tours of the lake depart from Punta Bandera, about 20 miles west of El Calafate. Once on board, you’ll first head to the spectacular Upsala Glacier, before moving on to the dramatic Spegazzini Glacier, the largest glacier in Los Glaciares National Park. And as you boat between these huge ice masses, you’ll pass the large icebergs that float in the lake, some of them carved into fantastical shapes and colored with incredible shades of blue. An estancia is a type of traditional ranch, and there are plenty dotted around El Calafate. Some of these estancias are open to the public. Estancia Cristina, for example, is a ranch-style lodge founded in 1914, located in an isolated but ruggedly spectacular glacial valley in a corner of Los Glaciares National Park. It’s accessible only by boat via Lake Argentino (which can also take you on a glacier cruise en route), and once at the estancia you can trek, fish and explore the area by 4WD vehicle, before returning to the lodge for a hearty lamb casserole. Another notable estancia is Nibepo Aike, a functioning sheep and cattle ranch on the banks of Lago Roca, about 30 miles southwest of El Calafate. Here you can join in with the daily activities of the ranch, eat a traditional lamb barbeque, go horseback riding, or spend the day fishing or wildlife spotting. The Glaciarium is a glacier museum of sorts: a modern glacier interpretation center where you can learn all about ice and glaciers through various mediums, including 3D models, dioramas and film. So if you’ve ever wondered how snow forms into ice, or how glaciers flow, this is the place to go. There’s also an ice bar inside the Glaciarium, where you can suit up in a cape, gloves and boots for a drink in what is said to be the world’s only bar made completely from glacial ice. The Glaciarium is about three miles outside of El Calafate. There’s a free hourly shuttle from the town to the museum. 5. Take a 4WD on the Native Experience

For a better understanding of how humans have adapted to and made their mark upon the area, you can head off on the Native Experience. This 4WD excursion takes you along the coast of Largo Argentino, with guides explaining the anthropological history of the region from the first humans known to have inhabited the area to the first expeditionary contacts with the Tehuelches (one of the indigenous cultures of Patagonia). The half-day tour includes a visit to an archaeological site of the Tehuelche culture, where you can see rock art created thousands of years ago.

How to Get to El Calafate

The easiest way to get to El Calafate is to fly. El Calafate International Airport is located about 13 miles east of El Calafate. There are daily flights between El Calafate and Buenos Aires, as well as cities such as Bariloche and Ushuaia, with more connections during high season (November to March, with peaks in January and February).

If you’re traveling overland, it’s fairly easy to include El Calafate on a wider trip encompassing other notable destinations in this part of Patagonia, such as El Chaltén to the north and Torres del Paine (Chile) to the south. There are regular bus departures between El Calafate and El Chaltén (3 hours); Rio Gallegos (4 hours) and Puerto Natales, Chile (5 to 6 hours).