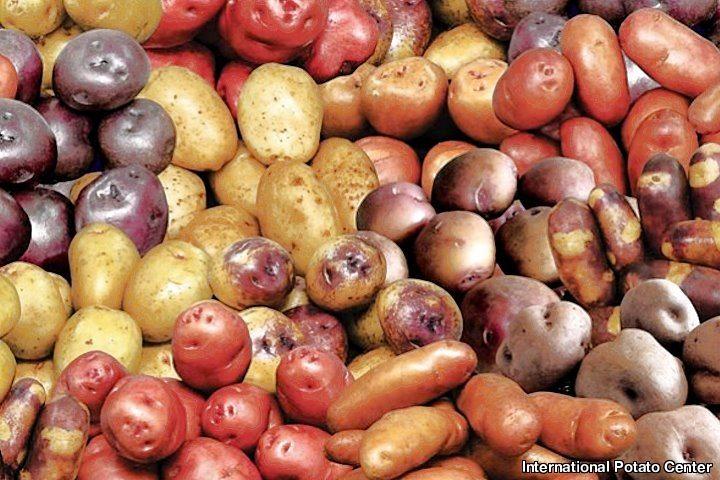 The knobbiest variety is called “makes the Daughter-in-law cry” for the difficulty in peeling it.  It was said that peeling one without losing too much of the potato with the skin was a test of a potential mate for Quechua men.

On a visit to Ayacucho, in the Andes, our host asked us to go to the market for potatoes to mash for our dinner.  When we arrived with what we thought were the right ones, she just laughed at our naiveté.  The ones we brought, though they looked not unlike the Yukon Golds we might use at home, would never be used to make the causa she was planning to make.  Back to the market we went.

There are thousands of varieties of potato in Peru, and they’ve been cultivated here for at least 7,000 years, so is it any surprise that it is a central feature in Peruvian cuisine?  Peru even celebrates National Potato Day on May 30th each year.

According to the International Potato Center – headquartered, naturally, in Peru’s capital city of Lima – there are more than 4,000 edible varieties of potato in the world, most of which are found in the Andes.  Although they do grow what we know as the Idaho potato in Peru, it is thought of as very bland by Peruvians.

It is difficult to believe that the potato, now one of the top crops produced in the world, was once limited to South America.  The first Spaniards to explore the area brought samples back to Spain in the late 16th Century, and within decades they were exporting loads of potatoes across Europe.

Here are a few dishes you should definitely try while traveling in Peru:

Papa a la Huancaína – One of the most common dishes in all of Peru, it consists of boiled potatoes, sliced and smothered with a rich yellow cheese sauce, often served with black olives and slices of hard boiled egg.

Causa – A sort of potato timbale, mashed potatoes layered with vegetables, fish or meat and formed with a mold.  Generally, a small yellow potato is used in this dish with a spicy yellow pepper sauce – aji amarillo – for flavoring.  The dish might include layers of avocado, tuna and tomato, or other meats or vegetables.

Chuño – A word meaning “freeze-dried potatoes” – from the Quechua language, and it refers to a type of potato that has been soaked in water then dried in the sun and then left to freeze at night.  This process is repeated until all the water has evaporated, leaving a dried potato.  This process was developed as a means of preserving potatoes for long periods of up to 15 years, and now figures prominently in the cuisine of Peru.  Numerous soups and stews use chuño, but it can also be eaten on its own after re-hydrating it.

Where to Find it in Lima:

Café Tostado is a hip spot in Barranco in a refurbished auto shop serving Peruvian comfort food, including a popular rabbit dish with sweet potatoes in an orange sauce.
Pierola 222, Barranco 15063, Peru

Paige Conner-Totaro is a freelance writer from Alexandria, VA.