Home » Blog » Among The Quakers Of Monteverde, Costa Rica, The Search For A More Suitable Life Benito Guindon’s eyes are twinkling as he canters down the hillside on wooden stilts.

“For years, I used to go around on these things.  Seventeen miles sometimes, all at a stretch.”

His bushy beard barely hides a boyish grin.  From the sureness of his pace, some two feet off the ground, even a marathon would appear to pose few challenges.

“I used to traipse all over, collecting funds for scholarships.  They were for the neediest members of the community, for their studies.  And also”—he smiles wryly—“it was boring to walk around normally.

“So I decided to go on stilts, which is a custom that’s been lost.  It’s a tradition here in Costa Rica.  Really, it was a way to be social.  People would talk to you when they saw you come by.  Nowadays you see lots of kids walking along, plugged into their cell phones, attached to their electronics, and they don’t even talk with each other.

“Meanwhile, here we even have soccer games on stilts,” he laughs.

Guindon’s unself-conscious exuberance on his high-stepping jaunts through the cloud forest where he lives grows out of a profound sense of acceptance, of himself no less than others.  It’s an acceptance based upon an uncommon inner peace, a harmony with the deepest part of the soul, and it’s something that members of his religious community—the Society of Friends, or Quakers—have had to fight hard for, considering they didn’t always find it in their native country.

That fight began in Fairhope, Alabama, during the Korean War, when several Friends felt compelled to leave the U.S. for their non-violent beliefs.  It ended in the highlands of Costa Rica, where, after much searching, the pilgrims eventually founded the community of Monteverde—Green Hill, in Spanish.

The community has evolved over the years.  A kind of smash-up between a wildlife reserve and religious utopia, Monteverde has morphed into thriving eco-tourist destination and model village, a small but bright beacon in the struggle on the part of the faithful to care for nature.  But through it all, it’s remained rooted in the acceptance embodied by Guindon and his brethren—an acceptance that’s synonymous with love, for others and for the earth.

Guindon reflects on this love as he steps down from his stilts.

“I feel really blessed that I’ve had this community here behind me.”

The Monteverde story harks back to the Cold War, with its climate of anti-communist militancy.  In those days, the U.S.-Soviet rivalry posed major dilemmas for Quakers like Guindon’s parents, who opposed all war—and military service—on religious grounds.

“[In the 50s] there was a peacetime draft in the U.S., and my father refused to register.  So my parents were sentenced to year-and-a-day prison terms.  And the judge that sentenced them said, ‘Well, if you don’t agree with the laws of this country, maybe you should find some better place.’”

Here Guindon pauses, to pluck a sprig of grass from the wayside.

“So they did.  They knew that Costa Rica had abolished its army, and was very receptive to people coming in and helping develop.  So the whole group decided to move down here, to live better.”

“The whole group” was 44 Quakers from Fairhope, Alabama, who in 1951, in the face of America’s growing military-industrial complex, pulled up stakes and headed to Central America.  Some flew; others made the arduous, three-month slog by car, crossing uncleared scrublands and shark-infested rivers before finally arriving at a mountain that looked west to the Gulf of Nicoya—a mountain that, to them, was like the Promised Land.

At $15 per acre, it was also cheap.  The group bought 3,500 of those acres, which it then proceeded to divide up into lots.  Roads, schools, meeting houses: all infrastructure was to be a communal effort, as were the cow pastures and the cheese factory the members set up to bring in money (they actually used Quaker Oats canisters as molds).

But not all was carpentry and agriculture.  Struck by the beauty of the natural paradise they’d stumbled across, the Quakers made the decision at the outset to set aside the top of the mountain as a development-free zone.  Permanently.  From its forested slopes flowed the headwaters of the streams that irrigated their farms, and its fauna—howler monkeys, keel-billed toucans—were a testament to nature’s glory.

It was a prescient decision, one they would later call “an inspiration from God.” 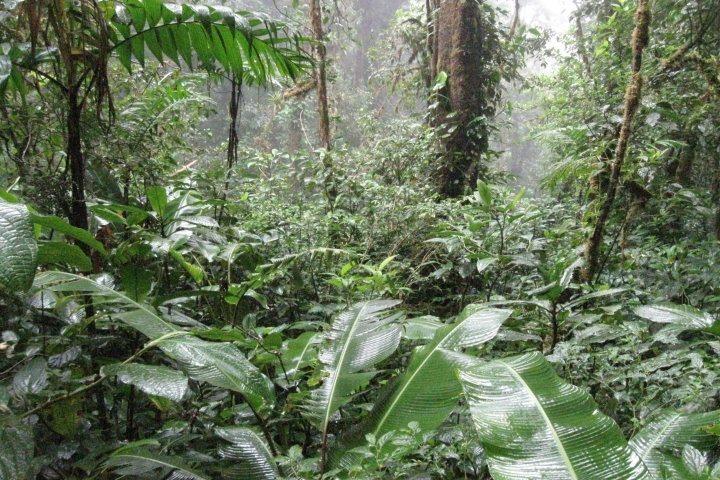 The Trials of Stewardship

As the Friends explored Monteverde more deeply, its marvels became increasingly apparent.  Shy agoutis would spy on the settlers from the underbrush; gorgeous brown three-wattled bellbirds pierced the silence with their metallic screeches.

But there was trouble in paradise.  By the 1960s, deforestation from loggers and cattle ranchers was already devastating the hillside, while the Quakers’ own clear-cutting had damaged their water supply.

1970 was the turning point.  That year, the biologist George Powell arrived in Monteverde to do field research for his Ph.D.  What he saw shocked him: acres upon acres of forest had been massacred, along with untold numbers of animal species.  Deeply concerned, he started working with Wilford “Wolf” Guindon, Benito’s father and one of the community’s leaders, to convert the settlers to “a philosophy of protection.”

“My father wasn’t originally an environmentalist,” Benito recalls. “But he ended up dedicating himself to nature conservation…He saw at the rate we were going, we were going to destroy the natural habitat for many species here on the mountain.  So he dedicated himself to that, and got recognition for it.

“We try to maintain that good stewardship today.  We’re all part of the same humanity, the same planet, which we share with the rest of creation.”

Working together, the elder Guindon and Powell bought up land in the area and established the Monteverde Cloud Forest Preserve.  Private companies in the area also donated hundreds of acres, and in 1973 the whole was given over to the Tropical Science Center, a San José-based nonprofit, to administer.  In 1975, the land the Quakers had originally set aside on the mountaintop was also incorporated into the Preserve, bringing its total acreage to almost 5,000.

The title for the new bio-reserve: Bosqueterno (Eternal Forest)—a reflection of the founders’ desire to safeguard this natural treasure forever.

“We were just looking for a more suitable way of life,” Guindon affirms.

By 1980, Monteverde seemed to have overcome its trials.  Deforestation was down, and the Quakers continued in their communal ways, setting up a popular bilingual school and intermarrying with the locals.  Bosqueterno became a major pilgrimage destination, not just for birdwatchers and animal lovers, but for zoologists attracted to its delicate ecosystem.

Artists came to paint its sun-splashed greenery.  Sensitive souls of all stripes would travel thousands of miles just to sit atop the continental divide, on clear days looking off at both the Pacific and the Caribbean coasts in the distance.

In 1983, National Geographic published a feature on the region, spotlighting Monteverde as a prime location to view the resplendent quetzal, one of the Americas’ most elusive birds.

The result?  An all-out invasion.

Suddenly swarms of tripod-toting tourists were descending on the peaceful community, guidebooks in hand.  Hotels and restaurants sprang up.  European and American backpackers moved in.  Developers made plans to massively expand the infrastructure.

This influx put a strain not just on the local ecosystem, but on the Quakers’ traditional way of life.  All of a sudden tourism, not agriculture, was the area’s chief industry, and with it came a visitor flow that today skirts 200,000 people annually.  Drugs and petty crime made their appearance in the formerly placid community.  In 2013, the cheese plant, which had gone from producing 350 pounds a week to 8,000 pounds a day, was sold to a Mexican corporation.

Many Quaker old-timers, like Wolf Guindon, were troubled by the region’s new direction, feeling there were just too many folks in Monteverde, residents or otherwise.  Bosqueterno, they argued, couldn’t maintain its purity while opening itself up to mass tourism.

Benito and others, however, continue to struggle optimistically.  They’ve worked to block the developers’ more intrusive projects, like the paving of certain roads, while little by little increasing the number of daily visitors admitted to the wildlife sanctuary.  Their goal?  Balance and sustainability: openness to the world on the one hand, while safeguarding the community’s 60-plus-year heritage on the other.

“We try to weigh day-to-day life against what’s going to remain for the next generation.  Hopefully they’ll be able to enjoy this world for many years to come.”

If Guindon’s acceptance and love for the earth are any indication, Monteverde may yet have a fighting chance.

“Yesterday there was a message given in the meeting about fear and love, really, being the two main emotions in life.  And I am very much aware of this fear that I’ve always had—of being myself, and being open.  It makes a big block for your spiritual journey, you know, for moving forward.

“I really feel that unless you’re able to be who you really are, and be open and honest…you’re never going to reach your potential.  And humankind will not reach our potential, unless we can really be who we’re created to be.”