High above the Andean town of Pisac, carved into a rock face that looks out over a valley of soft green terraces, there is a tunnel. A slender, teardrop-shaped slit arrived at via a narrow pass. This tunnel extends for 16 meters through an outcrop of solid granite, and is just wide enough for one person to traverse single file.

It’s not clear how this passage was made. The Incas, the builders, had no iron or steel tools, and the andesite in this part of the cordillera is flinty and unyielding. A rough calculation indicates some 120 tons of rock had to be displaced to bore through.

Nor is the tunnel’s purpose entirely clear. If it were a question of a simple walkway, there are ledges adjoining that presumably could have been hewn to this end. Elsewhere on the same ridge, one finds defensive gates and towers, but the cliffside pass seems an unlikely spot to mount a resistance against invaders.

A major engineering feat, then, with no clear purpose, and no obvious means of pulling it off.

In other words, a mystery that’s entirely typical of Pisac.

Historians today are fond of reiterating just how enigmatic the Incas remain to us, that what we do know about them pales in comparison with what we don’t. But Pisac takes that mysteriousness to a whole other level. Of the major archaeological sites in Peru’s Sacred Valley—Sacsayhuaman, Ollantaytambo, Machu Picchu—it presents the most intractable question mark.

It’s a case of too little information, clearly. Regarding Pisac’s function, the historical record is conspicuously silent. None of the chroniclers from the Spanish Conquest mentions it, no recorded battles took place there, no swashbuckling Yalies looking for lost cities broadcast its existence to the world.

What Pisac does have is aesthetics, and in spades. Comprising over four square kilometers of agricultural terraces dotted with clusters of striking edifices, it’s five times the size of Machu Picchu, with some of the most heart-stopping views in Peru. The stonework, as well, is legendary, and includes one of the few surviving intihuatanas, the strange solar clocks the Incas used to worship the sun.

“Nowhere,” historian Victor W. von Hagen once pronounced, “in all the empire of the Incas is there finer masonry, nor is there elsewhere, even at Machu Picchu, a plan so bold.”

Which means that visiting Pisac, one feels oneself close to the heart of the Incas’ mystery. The chief puzzle surrounding Pisac is just what exactly it’s supposed to be.

Partly the problem is the site’s architectural diversity.  Barracks, fortifications, civilian residences, temples, aqueducts, agricultural precincts: no other Inca ruin, including Machu Picchu, encompasses such a broad array of infrastructure.

Which buildings, though, define the site, give it its center?

That depends on who you ask.

Some scholars, focusing on the complex’s sweeping agricultural terraces, argue that Pisac is a kind of royal hacienda or estate built by the Inca Pachacutec in the mid-1400s.  According to this theory, the visionary emperor erected a rural villa to commemorate his defeat of the Cuyos, a rival Andean group who resisted Inca rule.  Pisac’s terraces thus would have provided corn, potatoes, and peppers for yet another imperial country home, a la Machu Picchu.

By contrast, more militarily minded researchers emphasize the complex’s defensive nature: swords, not plowshares.  They maintain that Pisac was one of a string of Inca pukaras—citadel communities—that stretched across the Andes, with agricultural plots to make them self-sustaining.  These pukaras served as fortified areas to which the surrounding population could retire if an enemy attacked.  From this perspective, Pisac is a strategic nexus for the control of the Urubamba River Valley, a valuable gateway to important locations like Paucartambo and the Amaru Mayu River.

Both theories have their problems.  If Pisac was a royal retreat, where’s the royal palace to house the king?  The architecture is decidedly modest, compared to the sublime heights of, say, Machu Picchu.  On the other hand, if fortifying the valley was what the Incas had in mind, why are the installations so spread out, thus weakening the ridge’s defensive barrier?

Whatever scholarly opinion ultimately decides, one thing is clear: the Incas went out of their way to work their installations into the surrounding landscape.  Nearly all historians agree the complex was conceived as an aesthetic whole.  Indeed, since p’isaqa is Quechua for “partridge,” some have tried to trace a partridge-like formation in the layout of the site—taking as their precedent the puma-like contours of Cuzco itself. 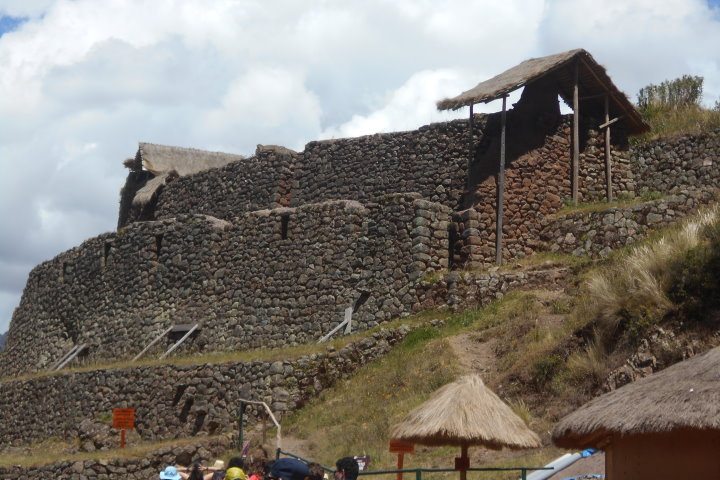 Strolling through the Neighborhoods

Pisac is divided into four separate building clusters, or neighborhoods.  The best way to see them is to take a bus to the parking lot at the top of the ridge and then walk down.  This way you can avoid the taxing climb from the hill’s foot.

The circuit starts with Qantu Rachay, the first neighborhood on your right as you leave the bus lot.  Built on three levels and looking something like a castle in a medieval town, these rough stone structures may have served as a military garrison or shelter for local villagers in times of war.  More important, though, is the view they afford.  Just to the west lie the first terraces, or andenes, cascading steps built into the mountainside to maximize the terrain available for crops.  The steps are 12 feet high in places, with walls of reinforced stonework and irrigation channels designed by Inca engineers to carry springwater from the peaks above.

The terraces also conceal a secret.  Just beyond them is Tantana Marka, which translated means “steeps of lamentation.”  Etched into the side of the limestone cliffs, this cemetery of some 3,500 Inca tombs is the largest in all Peru.  The graves, which look like mud swallows’ nests, were the resting places of nobles buried in the fetal position and were unrifled up to the end of the 19th century.

Passing beyond the graves, you arrive at Q’alla Q’asa, the hilltop complex that served as the site’s main residential area.  Nearly all its 30 buildings are rock stuck together with adobe, indicating they were probably inhabited by lower-status workers.  From a distance, however, their high vantage point makes them look august, like a fortress reaching to the sky. 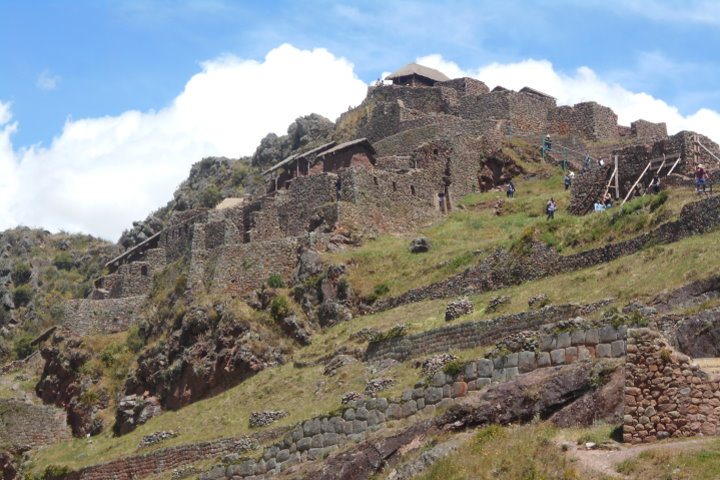 Altars to the Sun

Curving to the south along the ridge, the next stop is Amaru Punku, the Serpent Door, which served as a control point to prevent invaders from crossing the complex’s walkways.  This is followed by the 16-foot tunnel, hollowed from the rock.

It’s just beyond this point that Pisac’s true glory lies.

The ceremonial center, also known as the Sun Temple after its most famous attraction, is one of the marvels of Inca stonemasonry.  Hewn largely of pink granite, it features one of the few existing intihuatanas, the so-called “hitching posts of the sun” found at other Inca holy sites like Ollantaytambo and Machu Picchu.  Inca priests used these gnomons or sundials to chart the movements of the heavens and anticipate the approach of the solstices and equinoxes—though exactly how remains unclear.

In the case of Pisac, the intihuatana is cut directly into the rock of the promontory, like a Frank Lloyd Wright house growing organically out of its cliff.  This rock is surrounded by a D-shaped temple and oriented so that it aligns perfectly with the sun on the June solstice.  There is also an altar for animal sacrifices, as well as a ceremonial fount where water still flows.  Nearby, a chakana or three-tiered cross alludes to the three worlds of Inca cosmology: heaven, earth, and underworld.

Leaving the intihuatana, one more residential area awaits you below yet another swath of terraces.  The boxy cluster of P’isaqa is more refined in its finish than the stone-and-adobe constructions of Q’alla Q’asa.  Indeed, this radially organized group of domiciles sports some of the most perfectly finished rocks in the Tahuantinsuyu, according to the great Inca historian John Hemming.

Did Pachacutec stay here during his outings to the complex?  Did the buildings house the priests and generals in charge of Pisac’s various precincts?

Pisac offers few clues to these and other cruxes.  Yet in its very mysteriousness, its stones afford visitors a window onto the deep silence of the Incas’ Sacred Valley.

Eight Things To Do In Cusco, Peru
The Best Places to Visit in Peru
Ten Interesting Facts About The Inca Empire
The Road To Ruins: Seven Inca Sites You’ve Never Heard Of, But Should
Beyond The Inca Trail: Walking The Capac Ñan, South America’s Ancient Superhighway
Art And Artisans In Cuzco’s San Blas Neighborhood