Cartagena, Colombia. With summer just around the corner, the fortifications in this gorgeously salty Caribbean jewel are heating up.

No, it’s not from the baking equatorial sun, which, sweaty though it be, at least in Cartagena has the virtue of consistency, keeping the temperature on the chalk-white battlements uniformly scorching year round. Nor is the heat a consequence of (ahem) extra-legal ventures in the city, Netflix’s Narcos notwithstanding.

No, Cartagena’s fortresses are calientes due to tourism, which is slowly getting the buzz out on one of the most jaw-dropping networks of colonial citadels in the Americas.

Puerto Rico’s San Juan, Cuba’s Havana: these may be the crown princes when it comes to Spanish forts in the New World. But in Colombia, the sultry seaport known to locals as la ciudad heróica stands as the undisputed queen.

Pirates are the ones behind it. In the 1540s, when Spain’s King Felipe II made Cartagena a key shipping point for the gold and silver flowing up from Peru, he inevitably put the undefended town in the crosshairs of every corsair and freebooter in the Caribbean. A brutal string of sackings later, led by Francis Drake and John Hawkins, among others, and the Crown saw itself compelled to order the construction, in the 1560s, of a web of fortifications to protect the city’s storehouses from the Dutch, French, and English sharks menacing them offshore.

Today those forts are once again on the radar—this time, of Cartagena’s tourist industry. Expanded and reconstructed over the following two centuries, they’re now poised to become Cartagena’s Next Big Thing. They might not figure in the guidebooks, but government and private entities are working overtime to lure visitors with their stone bastions and cyclopean walls.

“It’s part of our patrimony, our cultural expression,” says Álvaro Gómez Poveda, director of ETCAR, a non-profit group that works with Colombia’s Ministry of Culture to maintain the fortifications and train locals to serve as guides.

“Together with Cartagena’s mayor, we’ve made entrance to several forts free, and we’ve planned cultural activities for the enjoyment of all our visitors.”

These efforts, which started in 2016, are slowly ratcheting up the flow of out-of-towners to Cartagena’s forts. By means of promotional videos, informational packets to tour operators, music festivals, and seminars in local history, ETCAR and other groups are spreading the word on one of the city’s big-ticket attractions.

“It’s about the promotion and protection of cultural assets, all of which have been declared [UNESCO] World Heritage Sites,” Gómez Poveda affirms.

To give you a jump on the tourist hordes, here’s a primer on these still under visited architectural gems. Use it to dig into Cartagena’s pirate history—before everyone else does.

“If the King of England wants to come here, he’s going to need a bigger squadron.”

So wrote Blas de Lezo, the one-eyed, one-armed, peg-legged hulk of a Spanish admiral who is Cartagena’s greatest hero, after his forces at San Felipe gave the Brits a vicious thrashing during a make-or-break battle back in 1741. And indeed, to take Cartagena’s flagship fortress, hunkered just outside the city on San Lázaro Hill, those enemy squadrons would’ve needed—well, some serious supersizing.

One look tells you why. At 850 feet by 520 feet by 130 feet high, San Felipe is gargantuan—the biggest fortification in Spanish America, and a massively imposing presence for anyone who visits. Exploring its multiple lines of defense, including some 63 cannons and a labyrinth of underground passageways, is enough to defeat even the most ardent military-history fanatic.

It clearly defeated the British, who under Vice-Admiral Edward Vernon found themselves overwhelmed during the War of Jenkins’ Ear in the spring of 1741. In an ill-planned attack that began before dawn on April 20, a thousand English grenadiers and regular infantry were mowed down in just four hours by musket and cannon fire from the citadel. That day, San Felipe’s bell tower effectively sounded the death-knell for British imperialism in the Caribbean.

Such deathliness was part of the fort’s design. San Felipe was constructed as a series of bunkers stacked one inside the other: if one part was breached, others could be used as a fallback. Cannons of one battery overlook the others, making it possible to shell intruders from a host of internal strongholds.

Add to that the subterranean tunnels, with their hidden niches for hand-to-hand combat, and the matacanes or chutes in the walls for pouring boiling oil on the enemy, and you have a huge, daunting cog in Spain’s military juggernaut.

Oh, and when you go: take care in those underground passages. Many still haven’t been explored fully. Visitors have been known to get lost—seriously lost.

In the 1700s, this tiny fort was repeatedly shelled by British privateers parked nearby, just off the Isle of Manga. Today, the main vessels pulling up alongside are yachts, which disgorge weekenders avid for sunset views at its tony seafood restaurant.

San Sebastián, like many Cartagena forts, has undergone multiple incarnations. Christened San Felipe de Boquerón in 1566, its first version represented the city’s fledgling—i.e., inadequate—attempt at self-protection. Among its defenses: a chain tied to cedar trunks that was fastened nightly, in an attempt to block access to nearby Las Ánimas bay. Needless to say, when Edward Vernon sailed past its primitive armature in 1741, he didn’t waste much artillery reducing it to rubble.

Undeterred, Spain’s crown fought back. In 1742, it ordered the fort to be reconstructed, renaming it San Sebastián after the then Viceroy and revamping it with a pastelillo– or pastry-type design, viz., one adapted to the contours of the surrounding terrain. The new garrison was more solid, but never saw combat. This accounts for why its installations are still in excellent condition today.

Said installations include 31 cannons, designed to be a last defense against invaders, as well as a water tank, powder magazine, and dock. The latter was commandeered in the 1960s by Cartagena’s Fishing club, and today the whole site offers exquisite bay side views from the patio of its Club de Pesca restaurant.

Helpful tip: If you visit, go on a weekend. Cartageneros love to host engagement and anniversary parties among the ramparts. They’ll have you up and dancing with the guests in no time. 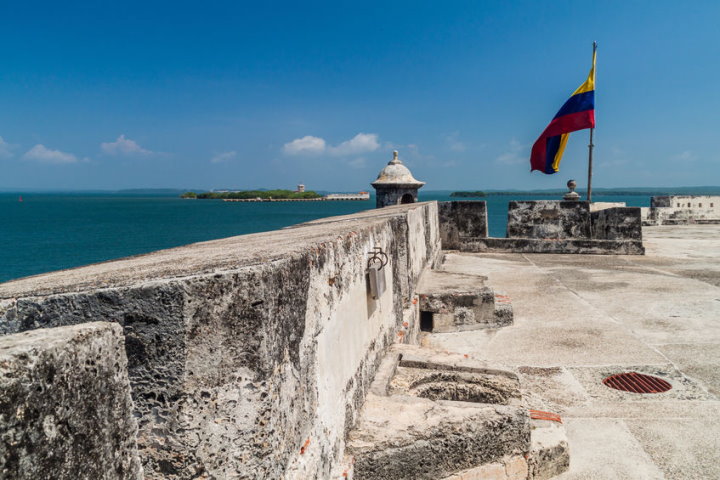 3. San Fernando de Bocachica, on the island of Tierra Bomba

If San Sebastián’s military technology represented a throwback to the Middle Ages, San Fernando’s, built in the 1750s, was cutting-edge. Alas, it only ended up being used against other cartageneros.

After Vice-Admiral Vernon’s disruptive visit to the city in 1741, the Spanish crown decided it wasn’t eager for a repeat performance. It thus set about beefing up its defenses on the island of Tierra Bomba, which overlooks the Bocachica channel, one of two entrances to Cartagena’s bay. San Fernando, with its sophisticated horseshoe design and 20-foot shark moat, was the result.

Completed in 1759, the fortress was one of the most formidable in all the Caribbean. Its curved outer wall followed the contours of the bay’s entrance, allowing its 60 guns to keep up a steady onslaught against enemy ships as they rounded the island’s southernmost point. Meanwhile, two bastions, named for the king and queen, protected the ramparts from attacks by sea and land, respectively. In the unlikely event a breach occurred, the fort’s galleries were mined with gunpowder, to allow for controlled detonation of the walls.

Today visitors can experience San Fernando’s massiveness after a 45-minute speedboat ride from La Bodeguita dock, located in Av. Blas de Lezo near the TransCaribe bus station. The trip across is enough to give you sunstroke, but seeing the ramparts rise up from the bay is glorious.

Postscript: San Fernando was ironically never used against the hated anglo adversary. After 1810, its vaults were converted into prison cells to detain Colombia’s independence leaders, several of whom served a stretch there before Spain finally threw in the towel in 1821.

San José is the yin to San Fernando’s yang. Companion forts in Cartagena’s heyday, they’re invariably visited together by tourists in the present.

San José’s design followed a basic principle of Caribbean military theory: el fuego cruzado, or crossfire. The idea was simple: upon passing through the straits of Bocachica, enemy ships would be lacerated by artillery from both it and San Fernando across the way. Any vessels that managed to slip through without being turned into Swiss cheese would run smack up against other fortifications closer to the city walls.

Nowadays, stopovers at San José tend to be short—blessedly for some, given the suffocating tropical heat. Still, they’re enough to take in the 21 cannons firing from the waterline in two batteries (fourteen and seven guns, respectively), the ramp to the upper parapets, and the sweeping views of San Fernando across the channel.

And don’t skip the seven bomb-proof vaults below: their cool darkness is a welcome respite from the blazing furnace outside.

Heights and depths: such are the draw at the Batería del Ángel San Rafael. The heights here are high enough, while the depths—well, they take you to some interesting places indeed.

As with most of Cartagena’s forts, location is the key. When the Spanish were bolstering their defenses in the 1760s, they sought a hilltop installation that could give advance warning of both sea and land assaults on the Bocachica channel. The logical choice was the Cerro El Horno, a 100-foot rise on Tierra Bomba Island with 360-degree views across the bay. But such a spot could leave the fort’s defenders isolated in the case of a siege. Hence the decision, by Spain’s military engineers, to dig a subterranean escape tunnel some 2,000 feet long, leading to a dockside battery along the shore.

Said tunnel is still very much in existence, and vies with the awesome hilltop views as the prime selling-point at Ángel San Rafael today. On days when it’s open, it’s possible to delve down from the fort’s plaza and hide in the clammy niches where Spanish troops would bayonet unsuspecting intruders.

Ángel San Rafael has other attractions: the six-foot dry moat with drawbridge was once filled with spikes, while the eight rusty cannons facing out from the plaza are all original—brought to light when the battery was excavated in 1995. In the end, though, the best reason to go is just to feel the sweep of history beneath you, as you look out from yet another rampart of Colombia’s still unexplored ciudad heróica.

The Best Places to Visit in Colombia
Ten Things To Do In Cartagena, Colombia
In Colombia, Reveling In The Human Comedy Of Fernando Botero
Ten Happiness-Inducing Activities in Bogotá, Colombia’s Festive Capital de Rumba
Getting To Know Beans About Coffee At Colombia’s Hacienda Venecia
The Best Places For Whale Watching In South America