Home » Blog » Eight Things To Do In Paracas, Peru The face-off is already underway as the launch sputters up to the rocks. One sea-lion bull, head swiveling in a wide arc to instill shock and awe, is reading the riot act to another, who retorts with a Pfffffftt snorted skyward as his jellied blubber shimmies against the ledge. The dissed bull snaps pettishly at the cow beside him, eliciting a nose-peck of reassurance. A lull. Then, suddenly, both males’ heads lash forward, like snakes striking. A baring of teeth. Barks of Orp, Orp like two old men bellyaching. Then, a second female intervenes, and abruptly, the spat is over. Both bulls flop back against the rock, spent.

In the launch, a thicket of iPhones has gotten it all down, as the orange-life-vested tourgoers grin and comment.

Tiffs like this are about as animated as it gets in Paracas, Peru. Aside from a bit of mate-guarding among the marine life, and the dull crash of the surf, and maybe a parasail or two floating lazily in the sky, not much excitement disturbs this one-time fisherman’s village south of Lima on the Pacific coast, where the seabirds nestle unruffled among the crags, and the quayside cafés on the malecón exude a breezy air of holiday.

That’s the way locals like it. Sure, construction on the main drag never seems to advance any. And maybe the waitstaff spends more time fraternizing with the café clientele than attending to it. But in Paracas, no one’s in much of a hurry anyway. Things to do in Paracas, they get done on their own sweet time, without anybody’s rushing.

Here’s our list of eight things to do in Paracas.

1. Outings to the Islas Ballestas

Exhilaration: feeling the morning sun and spray in your face as you bump past these craggy rocks in a fast launch is a jolt of pure joy. Even more so is getting an up-close look at the wildlife, which is bountiful on these “poor man’s Galapagos.” Humboldt penguins, Peruvian boobies, sea lions, bottlenose dolphins: the rocks here are crawling—and barking and squawking—with marine species. There’s even a chance of spotting humpback whales, if you catch the season right.

In the 19th century, the Islas Ballestas were prime offshore real-estate for the harvesting of guano (bird droppings) to make fertilizer. Today, this grimy work continues, though nowadays most of the area is dedicated to artisanal fishing—some 600 pescadores ply the government-protected waters. Farther out, sea-wolf colonies crowd the coastline, but lucky boat-goers might catch a glimpse of the marine otter, a rare saltwater species that frolics offshore. Candelabra of the Andes

Who carved this 595-foot etching into the north face of the Paracas peninsula’s cliffs? More importantly, why? When you motor out to the islands, you’ll have a chance to speculate for yourself. Does it represent the staff of the Inca creator-god Viracocha? Or a rare Andean hallucinogenic plant? Archaeologists are still squabbling, but seeing this millennial glyph from a skiff in Paracas Bay adds a note of mystery to any day’s outing.

The bay’s cliffs were once home to the Paracas culture (900 to 100 B.C.), who may have etched the candelabra design into the sand around 200 B.C. Later it was glimpsed by Pizarro’s conquistadors, as well as by José de San Martín, who landed at the nearby city of Pisco in 1820 to liberate Peru from Spanish rule. Today it draws thousands of spectators annually, who come to gaze on its enigma amidst the lonely sands. “Straight off the boat” is no hyperbole when it comes to Paracas’s seafood. As elsewhere in Peru, here the day’s catch sitting scrumptiously on your plate was likely pulled from a fisherman’s net just hours before. Relaxing outdoors on the malecón, shaded by an umbrella at one of the many nautical-themed cebicherías, you’ll find an environment where the flavors are in perfect harmony with the wind and waves.

Paracas’s eateries run the gamut. Chalana, in the Hotel Paracas by Marriott, serves tiraditos and causas (fish carpaccio and mashed-potato rolls, respectively) that can hold their own against the best in Lima. Meanwhile, at Pukasoncco Arte y Restaurante, you can buy Nazca- and Paracas-inspired paintings to go with your meal. Don’t miss the fantastic 3 Keros by the Sea, where the owner-chef, Ricardo Behar, personally educates you about each day’s culinary creations. Think the Incas only built their monumental citadels in the Andes? Think again. This huge administrative complex an hour outside Paracas was frequented by the great emperor Pachacutec himself. Its trapezoidal geometry—once emblazoned with red, white, and gold stripes—is reflected in every niche of the architecture, which recalls sites like Colcampata in Cuzco.

Tambo Colorado was erected in the 15th century, with stately palaces fronting a large central plaza. Its raised ceremonial platform, or ushnu, served as a throne for the Sapa Inca, who used it to extend his power along the coast to Pachacamac and beyond. Today, visitors can wander the alleys of the ghostly hillside pueblo, immaculately preserved by the aridness of the Peruvian desert. 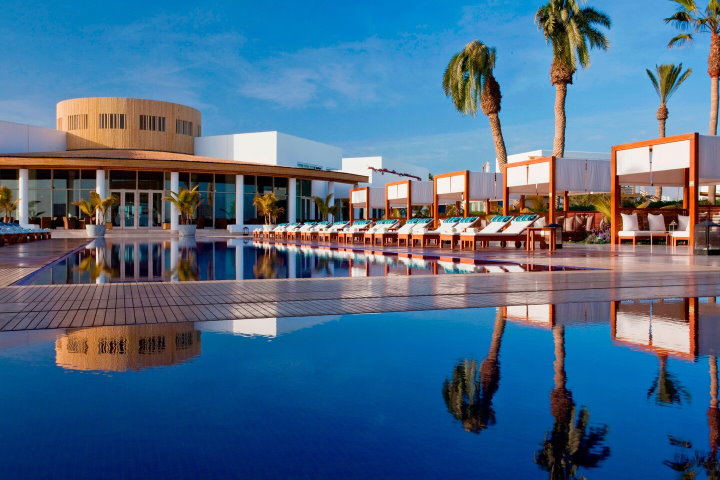 5. Relaxing in Style at Paracas’s Resorts

Paracas has its backpacker hostels, sure. But for luxury travelers, the town’s resorts overlooking the bay offer the ideal pretext for some decadent pampering. Infinity pools, volleyball nets, full-service spas, windsurfing rentals: Paracas’s amenities are world-class. Making them even more splurge-worthy is the fact that here, the sumptuousness costs a fraction of what you’d pay in Brazil or the Caribbean.

The standard-bearer for glitz is the Hotel Paracas, whose airy, cabana-style bar and poolside lounge are a perfect place to take in the sea breezes. Non-guests can purchase a day pass to roam the palm-lined grounds. There’s also the Doubletree Resort by Hilton, where kayak and catamaran rentals let you explore the scintillating bay. Take advantage of seasonal discounts: the opulence here can be surprisingly affordable. Scarlet beaches, horseshoe coves, wind- and wave-sculpted rock formations: the stark desert landscape of this 1,300-square-mile eco-reserve dazzles with its strange, lunar beauty. Hiking and swimming beneath its hot amber cliffs is an uncanny experience, like wandering on an alien planet.

The Paracas reserve was first explored in the 1920s by archaeologist Julio César Tello, who discovered a vast necropolis—city of the dead—beneath its parching sands. Today a museum named in his honor showcases the bottle-shaped tombs, textiles, and weird cranial deformations that are hallmarks of this enigmatic civilization. You can also tour the sand flats in an ATV, or watch for flamingos and pelicans from the lookouts on the cliffs. Bring your binoculars—and lots and lots of sunscreen. Ever wanted to fly off into the sunset? In Paracas, you can do it, as Peru’s best para-pilots take you up for a seagull’s-eye view of the area’s cliffs. The flight out over the Pacific whitecaps is thrilling, with the arid dunes falling away beneath, and the horizon tilting perilously towards the vertical.

PeruFly has been around for over 25 years, with skilled pilots devoted to their guests’ safety. Their crew handles every aspect of the trip, leaving you free to enjoy the views. This is flying the way the birds do it: no motors or vibrations, just the rush of the wind through the canopy. Hold on tight to that selfie stick! 8. Soaring over the Nazca Lines

Astronomical calendar? Pilgrimage site? Supplication to the gods for rain in the bone-dry Peruvian desert? These mysterious geoglyphs some 130 miles southeast of Paracas constitute one of Peru’s great unknowns. Equally unknown to many tourists is the fact that you can conveniently charter a flight to visit them from Pisco, just 15 minutes outside Paracas Bay.

Etched into Peru’s reddish-brown hardpan by the Nazca culture between 400 and 650 A.D., the Nazca lines comprise both geometric designs and animal figures, including monkeys, hummingbirds, and spiders. If you want to skip the dusty three-hour trip to Nazca city to see them, flying from Pisco is a perfect option. The 1-hour-and-40-minute flight in a Cessna Grand Caravan takes you to see 15 or so of the most celebrated glyphs, bringing you back in time for a cebiche-and-pisco lunch before the coastal mist burns off.