Unlike other South American countries, Colombia doesn’t have disparate geographic zones whose temperature varies from season to season. Instead, its regional climate varies in accordance with altitude, with temperatures remaining more or less constant throughout the year owing to the country’s proximity to the equator. There are also wet and dry seasons, with all the flooding and other complications to go with them.

In the north, the climate along the Caribbean coast is lushly tropical, with high humidity, warm days, and equally balmy nights. If you’re headed to Barranquilla or Cartagena, light cotton clothes and sandals are de rigueur. As you go further inland, the northern spurs of the Andes rise into view, and temperatures and humidity levels fall accordingly. Medellin, at an altitude of some 5,000 feet, has an average annual temperature of 72, while Cali to the south, at 3,300 feet, hovers around 77, causing it to be called “the city of eternal spring.”

Bogota, at 8,600 feet, is the coldest of Colombia’s major destinations, with cool days and nights that dip into the 40's. The Andean sun can be fierce at times, and there are occasional storms that can give the city a somber aspect. Further to the southwest, the Amazon region is warm and rainy year round.

Wherever you go, you’ll want to avoid Colombia’s rainy season, whose worst months are October and November. Take special heed if you plan to go hiking, as bad road conditions are common. The two dry seasons (December to March and July to August), are the best times to visit.

Average monthly temperatures (°F) and rainfall (inches) for select locations in Colombia are shown below. 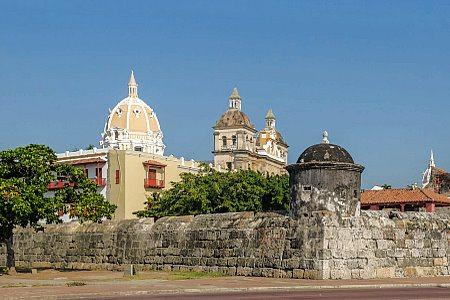