As befits the largest nation in Latin America, the geography and climate of Brazil are incredibly diverse, ranging from the thick heat of the Amazon to the lush windswept forests of the central savannah to the tropical beaches of the coast. Weather also tends to vary within each region.

The northeastern region, encompassing cities such as Belem, Salvador, and Recife, sports a warm tropical climate stirred by fresh sea breezes. Temperatures remain in the 80's year round, with rains heavier during certain parts of the year (January to May along the northern coast, May to July further east). Generally, though, the showers last only a short time, just long enough to cool things off a bit before the sun returns.

Meanwhile, further south, the beaches of Rio de Janeiro are host to hot and humid summers and mild winters. Temperatures can climb well into the 90's from December to March, to the delight of Cariocas, who revel in the sizzling summer days. These are also the months leading up to Carnaval (usually in February), South America’s most celebrated bacchanal. São Paolo is similar to Rio, but its slightly higher elevation—some 700 meters above sea level—takes the edge off southern Brazil’s tropical heat.

Those seeking to explore the Amazon will encounter, predictably, steamy temperatures and high humidity, with heavy rains during winter. The latter lasts from December to May, and many areas are flooded from the cloudbursts that occur nearly every afternoon. June to August is the driest season; the waters recede, and wildlife-viewing opportunities increase. If you’re headed for the Pantanal, the tropical wetlands system in the southwestern floodplain, expect to encounter similar conditions, though from May to October things cool down considerably.

Average monthly temperatures (°F) and rainfall (inches) for select locations in Brazil are shown below. 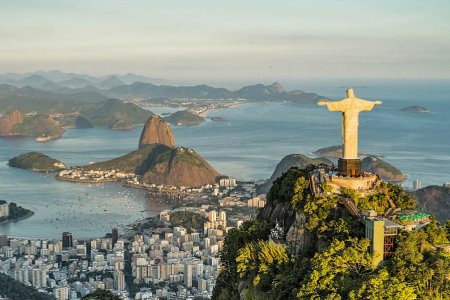